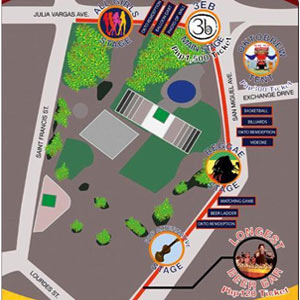 Oktoberfest 120 (siento bente) attempts to break two Guiness World Records this year: the longest beer bar and most number of people toasting. To grace the 120-day event, American alternative band, Third Eye Blind, will be performing during the kick off party tonight, September 5. Pictured here is the map that shows the area, which will be occupied by the launch party.


The Oktoberfest has been a tradition for Filipinos, in fact, some even call it as the "beer drinking fiesta." Pinoys usually celebrate it in the whole month of October. However, this year, San Miguel Beer (SMB) will make it grander by stretching the celebration into 120 days, starting today, September 5.

To start the party, San Miguel brings American alternative band called Third Eye Blind (3eb) in Manila. The three-member band, which popularized the song "Semi-Charmed Life," will be gracing one of the four stages along San Miguel Avenue, in Ortigas Center, Pasig City.

Aside from this foreign band, local bands such as Rivermaya, After Image, Pinikpikan, and former Rivermaya member Rico Blanco will give music and entertainment to concertgoers. They will be joined by 35 other rock bands in the country. While SMB personalities, like, Efren "Bata" Reyes and PBA players will be playing with the partygoers in the "Beat the Champs" corner.

Through the strong support of the Filipinos, the Department of Tourism now recognizes the event as a local fiesta. And as an added highlight, San Miguel Oktoberfest 2008 will try to break two Guiness World Records: the longest bar and most number of people toasting.

A 600-meter beer bar is laid out from Julia Vargas Avenue to Lourdes Drive, Ortigas Center, Pasig City to beat the current 240 meters record of Taiwan. On the other hand, the country also attempts to best the current 13,500 beer drinkers who raised their glasses for a toast in Las Vegas, Nevada.

For this occasion, motorists are advised to take alternative routes since the stretch of San Miguel Avenue, from Julia Vargas to Lourdes Drive, will be closed to traffic from September 3 to September 6, 2008.

There will also be simultaneous all over the Philippines. Parties will also be held in Olongapo, Zambales; Sta. Rosa, Laguna; Lapu-Lapu City, Cebu; and in Davao. San Miguel Oktoberfest 120 will span for 120 days, starting September 5 until December 2008.

In order to watch the performance of Third Eye Blind one must buy a gold ticket which is priced at P1,500 per head. This includes two San Miguel Pale Pilsens at the general admission section, three limited edition of San Miguel Oktoberfest beers, and food at the special Oktoberfest Marquee section.

Another ticket being sold is the special Oktoberfest Marquee ticket, which costs P300 per head. It includes three limited edition of San Miguel Oktoberfest beers and food.