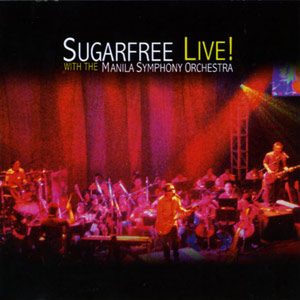 
It was in September 29, 2007 when the trio of Ebe Dancel (guitar-vocals), Jal Taguibao (bass), and Kaka Quisumbing (drums) joined forces with The Manila Symphony Orchestra at the Music Museum in Greenhills, San Juan to stage Sugarfree's first major concert.

Known for their string of hits such as "Mariposa," "Telepono," "Burn Out," "Prom," "Tulog Na," "Hari Ng Sablay," "Dear Kuya," "Wag Ka Nang Umiyak," and "Kung Ayaw Mo Na Sa Akin," among others, Sugarfree no doubt was ripe for the picking to hold a big concert.

The band, however, opted to conduct things differently from the usual setup. Despite their proficiency and reputation as a solid hit making machine, the band candidly admitted that they still feel insecure when it comes to their overall sound—a sentiment amplified even more during the time the trio were preparing for the concert.

In an interview with PEP (Philippine Entertainment Portal) last year, Ebe confided how the band faced certain limitations during live gigs because of their three-piece arrangement. While most bands are composed of four or even five members, Sugarfree opted to settle for the modest guitar-bass-drums attack.

It's not really too much of a problem as the band manages to compensate for whatever shortcomings by tweaking on their live sound and making some adjustments here and there. The band also developed a loyal fan base over the years and three albums after, Sugarfree songs are well-known to most people that it is common to hear the crowd singing along with Ebe, consequently taking the pressure off a bit from the talented singer-songwriter.

"But for a major concert we really wanted to offer something new. Parang we find it boring kung the usual three-piece set up lang na kami-kami ang nasa stage," shared Ebe.

INVITING THE MSO. Back in May 2005, Sugarfree performed an acoustic set at the Hard Rock Café in Makati City. For the occasion, the band was joined by a flutist, two violinists, a cellist, and a pianist. Later also that year, the pop-rock trio graced the second installment of Rockestra where they were joined by the Manila Symphony Orchestra for the first time.

The seed then was planted.

Overwhelmed by their previous experiences, the band decided to collaborate anew with the MSO for their first major concert.

The preparations were painstaking. Working with the MSO was not easy and the band found themselves adjusting to the meticulous and disciplined approach of the orchestra unit. It was Chino David of the band Silent Sanctuary who led the MSO in going through the songs together with Ebe, Jal and Kaka.

As it turned out, embellishing Sugarfree's songs with an ensemble only added lush to the band's already heartwarming numbers—making the songs more poignant and warm.

Working behind the scene was director Treb Montreras, who took care of directing the event documentation all the way to the actual show. Esteemed producer, Angee Rozul of Tracks Studio, was also around to record the entire concert with his trusty multi-track audio recording. Shari Villa weaved her lighting magic to complement the mood of the music.

SUGARFREE LIVE! Spurred by the success of the concert, EMI Philippines re-lived the entire experience by releasing the album titled Sugarfree Live! with the Manila Symphony Orchestra.

The double-disc record crisply captured Sugarfree's performance as backed up by the Manila Symphony Orchestra. Playing in front of a jampacked crowd, the trio dished out their songs—from the popular singles to some unreleased yet strong numbers—found on their previously released albums.

But aside from delivering the expected goods, Sugarfree also rendered some unexpected songs like those still unreleased singles during the time of the concert. They also pulled off a cover of the Ben Folds Five ditty, "Still Fighting It."

Ebe, Jal and Kaka are one in saying that the concert was very special and they were all touched by the entire experience. In fact, all three admitted that they were close to tears during their performance with the MSO. "Buti na lang naka shades ako," wrote Ebe on the album's dedication.

As a gift to the fans and also to show their gratitude, Sugarfree and EMI Philippines decided to release the record that is also intended to tide fans over until the trio wraps up their soon-to-be-released fourth album.