PEP REVIEW: MYMP "Now" can still get you hooked 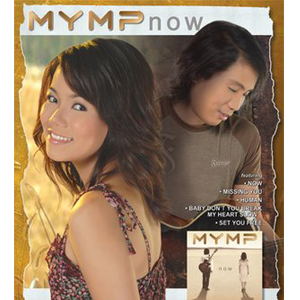 The Now album of Juris Fernandez (foreground) and Chin Alcantara was released during the latter part of August. Its carrier single "now" is bound to hit the top 10 charts.

With platinum albums attributed to their group, the popularity of M.Y.M.P. can no longer be disputed. The velvety voice of Juris Fernandez can actually lull one into sleep, while the arrangements of Chin Alcantara are impressive.

In their previous albums, they popularized a lot of revival songs. "Waiting in Vain" and "Tell Me Where It Hurts" were my personal favorites. I liked Chin's playful guitar strokes for the former, while the rendition of Juris for the latter was truly earnest.

But I wasn't so keen about their original singles like "A Little Bit" and "Talaga Naman." These two songs were great hits, but they're quite juvenile for my taste.

Until I heard "Now."

The carrier single of their recently-released album, which has the same title, is breezy and gratifying to listen to. Cebu's pride Cattski Espina's straightforward lyrics and Juris's clear voice can hit a listener right to the core.

Another original piece of the group is "Wish List," which will surely land the top 10 charts come Christmas. One thing to note here is Juris's treatment of the song, it is quite intense.

"Missing You" is another gem in the album. The arrangement did not deviate that much from John Waite's, except for the guitar intrusion in some portions of the song, which added some character and became a good contrast to the melodic voice of the vocalist.

If you want to hear the country version of Heart's "These Dreams," Madonna's "Cherish," and Paula Abdul's "Rush, Rush," this album has them. Pay attention to the brief guitar intro for the songs, the apt description is striking.

In addition, the male back-up on "These Dreams" is a nice touch. "Cherish" and "Rush, Rush" have a much slower and more relaxed tempo.

Pretender's "Human," Step's "Make It Easy On Me," and Restless Heart's "When She Cries," which is the only track of Chin in the album, can be perfect company while driving.

When you're in a senti mood, switch to "Baby Don't You Break My Heart Slow," a Vonda Shepard song, and "Set You Free," an original of Side A. The latter was personally hand picked by Juris, and she gave a soulful female version for the song.

And if you like a less-edgy and more laid-back interpretation of "Impulsive," which was popularized by Wilson Phillips in the early ‘90s, then you will enjoy the duo's version.

As a whole, M.Y.M.P. "Now" is more adventurous in terms of their cuts selection, more mature on their sound, and more distinct when it comes to their brand of music.

And I'm certain M.Y.M.P. will once again live up to what it truly stands for: "Make your momma proud."