PEP REVIEW: Jolina Magdangal is in harmony with her "Destiny" 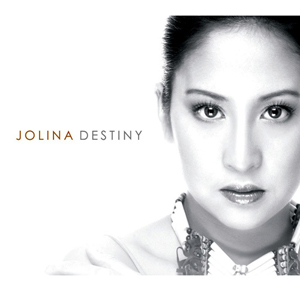 "Will of the Wind," the carrier single of Jolina Magdangal's recent album titled Destiny, is the theme song of her latest movie under GMA Films, I.T.A.L.Y.

Jolina Magdangal has been in the music business since her 14Kdays. But people noticed her when she joined Ang TV, a teen-oriented show of ABS-CBN. Aside from her adventurous fashion sense, what made the cute and bubbly girl a stand-out was her singing talent.

Remember "Tameme," a song she launched in the late '90s? The lyrics was bouncy, and Jolens's interpretation was blithe.

Of course, it is hard to miss "Paper Roses," a song popularized by Anita Bryant in 1960s. Instead of adopting the melodramatic tone of the song, Jolina gave it a cheery approach, which earned the nods of the mainstream market.

Her latest hit "Maybe It's You" was on the sentimental side, and the lady captured the perfect emotions apt for the song. Didn't you sense the longing in Jolina's voice?

Fast forward to 2008, she releases Destiny under GMA Records.

The album has three revival cuts, five original songs composed by Agatha Obar (the same person who wrote "Maybe It's You"), and two tracks from Marc Tupaz of Shamrock.

The music selection is more mature, and the treatment has more depth. Here, Jolina completely says goodbye to her pa-kikay and pa-kilig persona.

ENGLISH CUTS. In the "Will of the Wind," Jolens becomes wistful. What makes it different from the original? The tempo is a bit faster, plus, a bridge is added. What makes it better? The back-up vocals and piano melodies enrich the piece. This Jim Photoglo-revival is bound to be a hit.

Jolina's version of "When I Fall in Love" is light and unfussy. The arrangement drops the dramatic flair of previous versions and lets the vocals dominate the piece. The result, nonetheless, is still heartwarming!

"Stitches and Burns" did not deviate much from the version of Fra Lippo Lippi, except for the notable addition of guitar and the faster beat. The overall effect is quite pulsating.

The only original piece in English, "When I Close My Eyes," will either land the top ten OPM charts or the primetime block as theme song for a TV series. Jolina gives her large pinch of soul to this song. The intro is heartrending, then percussion enters to reinforce the strong emotions come second stanza. The lyrics and arrangement combine both strength and vulnerability.

TAGALOG TRACKS. "Umibig Ka" and "Isang Taon" veer away from the usual piano ballads, as both tracks are a bit heavy on rhythm. Jolina gives her soft voice some spunk, thus, transforming herself into a rock-pop diva.

"Tuwing Kasama Ka" and "Pangako ng Puso" are both refreshing, although the message of the two songs are entirely different—the former talks about being happy with the one you love, while the latter encourages love to learn how to trust again.

The first reminds me of a Joey Albert song, but that isn't a problem at all. It is a bit uncertain but enthusiastic. It is mellow with a tinge of vibrance. The latter is a fitting finale for the album. It is both pensive and poignant. The melody is unobtrusive, and Jolina's pristine voice soars and becomes the highlight.

And it hopes to touch the souls of those who are in love, who fell in love and lost, who fell out of love, who are moving on, but are neither tired nor jaded.

The cute and bubbly girl we met several years ago is almost ready for her destiny. And it's full of promise!