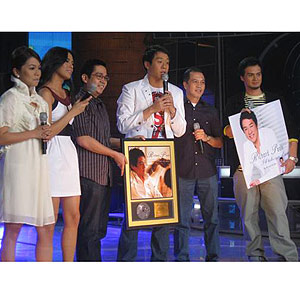 Richard Poon (middle, in white) received the Gold Record Award for his album I'll Take Care of You during the September 14 episode of ASAP ‘08. He is joined by (from left) Juris of the band MYMP, Nikki Gil, Wilson Cruz (MCA Music's marketing director, Ricky Ilacad (MCA Music's president), and Billy Crawford.


MCA Music and Cornerstone Music are proud to announce that Richard Poon's debut album I'll Take Care of You is certified Gold. The big band crooner received the Gold Record Award during the September 14 episode of ASAP '08. Nine months from the album's market release, I'll Take Care Of You has turned gold by selling over 12,500 units.

In celebration of the album's overwhelming success, MCA launches the I'll Take Care Of You Platinum Edition. This 2-disc set includes the best-selling album, bundled with the minus one versions of his well-loved repertoire. With the Platinum Edition, you can listen to the hits and sing along to them at the same time.

Richard Poon is the Philippines' big band crooner who has been touted to be this generation's Jose Mari Chan. Richard's mother is a well-known opera singer from Taiwan and his father a famous basketball player and cook from Hongkong.

He recorded and released his first solo 13-track album I'll Take Care Of You this February 2008 under MCA Music. Richard calls his music "fresh old-school."

The album boasts of livelier, highly energized, and refreshing takes of well-loved '50s "standards" from Frank Sinatra, Tony Bennett, Matt Monro, Harry Connick Jr. and the like. But the main highlight of the album showcases Richard's premiere strength as a crooner/ balladeer as he captures and romances the heart of his listeners with his timeless love songs.

Unknown to many, Richard (together with his piano player Osen Fernando) arranges his own music, and continues to delight and surprise his younger audiences with his unexpected "Big Band" arrangements of contemporary covers like Beyonce's "Irreplacable," Rihanna's "Umbrella," Sean Kingston's "Beautiful Girls," Mariah Carey's "My All," Avril Lavigne's "Complicated" and more hits with his four-piece jazz band.

Despite being a newcomer in the music industry, in less than a year, Richard has already received major nominations in two of the country's most prestigious awards including the 2008 Awit Awards, going up against legendary icons Gary V, Martin Nievera, and Jose Mari Chan as co-nominees in the Best Male Artist category and Best New Male Artist. In the 2008 Aliw Awards, he was nominated in the categories Best New Artist and Best Male Hotel & Lounge Performer.

Further solidifying his musical artistry, Richard left the audience in awe during his first two-night major solo concert at the Music Museum last May 1 and 2 produced by ASAP Live.

Unlike most crooners, however, Richard is also an excellent song writer and arranger who writes diverse original compositions like the enchanting and light-hearted lullaby "Lalala" used in the movie soundtrack of the Piolo Pascual/ Regine Velasquez film Paano Kita Iibigin, and most recently, another RP original "Kahit Di Mo Napapansin" used in ABS-CBN's new My Girl teleserye soundtrack with Kim Chiu as lead character.

Just last month, he wrote a song for the 11-year-old young international star, Britain's Got Talent finalist Charlie Green, which will hopefully be a part of his forthcoming album. Richard is also blessed to be included in Gary V's tribute album with his big band version of "Wag Mo Na Sanang Isipin" as the carrier track.

Currently, Richard continues to be a resident artist of Eastwood City every Tuesday and regular guest in ABS-CBN's Sunday noontime show, ASAP '08. He has also one of the most sought after performers for corporate events, weddings and private parties.

From October 3 to 7, he'll be in Sydney, Australia to perform for the Filipino community in the Fiesta Kultura 2008 courtesy of ABS-CBN's The Filipino Channel (TFC) with Cesar Montano, Pooh, and Nikki Gil. On October 25, he will have a fundraising concert at the SM Megamall Cinema at 8 pm with Ai-Ai delas Alas and bossa nova singer Sitti.

Grab a copy of I'll Take Care Of You Platinum Edition, a two-disc CD that is available in all major record bars for only P350.