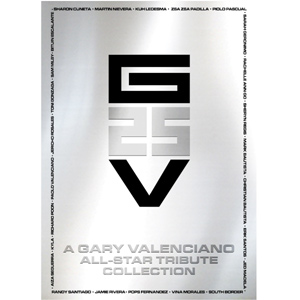 
Well-known singers of the music industry give tribute to the man that has served as an inspiration to many and who has always been considered as an embodiment of a total performer—Gary Valenciano. The singer who has recently celebrated his 25th anniversary in the music scene received an all-star tribute collection featuring the greatest hits of Mr. Pure Energy himself. The double-disc album called GV 25 (A Gary Valenciano All-Star Tribute Collection) is released by ABS-CBN and Star Records.

Respected artists from the music industry were honored to take part in the GV25 album rendering their own version of Gary V's timeless songs namely: Kyla ("What More Can I Say"), Jamie Rivera ("Letting Go"), Sheryn Regis ("Pasko Na Sinta Ko"), Jericho Rosales ("Di Bale Na Lang"), South Border (Laughter All The Time), and Bituin Escalante (Take Me Out Of The Dark).

Gary's fellow ASAP performers made sure to contribute their own interpretation of his songs. These include Erik Santos ("Gaya Ng Dati"), Mark Bautista (You Got Me Working) , Christian Bautista (After All), Rachelle Ann Go (Paano), Sarah Geronimo (Kailangan Kita), Zsa Zsa Padilla (Ikaw Lamang) , Kuh Ledesma (Could You Be Messiah), Jed Madela (Until Then), and Richard Poon ("Wag Mo Na Sana Isipin").

Concert King and Queen Martin Nievera and Pops Fernandez rendered their take on the songs "Narito" and "You Got Me Working," respectively. Young stars Toni Gonzaga and Sam Milby were also tapped to sing "Wait Forever" and "Each Passing Night" for GV 25.

Finally, the renowned singer-dancer also got a tribute from his Paolo when he sang "Look In Her Eyes" for this historic compilation.


Top-caliber performers praised Gary Valenciano for his professionalism, his innate talent in entertaining people and most importantly, his inspiring personality.


"Gary V. is the most dedicated artist in the business," declares Martin Nievera. "His musicality is unmatched. He memorizes every beat and every lyric and if you're not careful, he will memorize your beats and lyrics too. It's an honor to share the stage with him, but an even bigger honor to sing one of his classics. Gary is more than a friend, he is our spiritual hero."

Pops Fernandez thinks this is the right time to remind Filipinos about the greatness of Mr. Pure Energy. "It's always an honor to be a part of Gary's work and this new album is no exception. It's about time a new generation of listeners get to listen to and appreciate the legacy that Gary carved in the OPM industry. I've had the good fortune of doing a remake of ‘Reaching Out,' one of the first hits that Gary recorded. I love that song. I grew up with it and it brings back a lot of wonderful memories."

Megastar Sharon Cuneta had this to say about her fellow singer: "I can't imagine the Philippine music industry without Gary Valenciano. When you say Mr. Pure Energy, that really means so much more that what it initially seems to mean. Gary is an institution at such a young age. He's a huge, huge superstar and has brought our country many honors."

During the surprise party organized for Gary V last August 6, the 44-year old singer expressed his gratefulness for all the singers and the organizers of the tribute album. Click HERE to read related article.


Grab a copy of GV 25 All-Star Tribute Collection under ABS-CBN and Star Records and hear the new versions of Gary V's best hits, available in record bars locally and internationally.