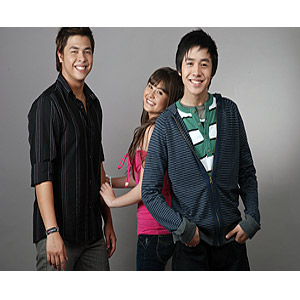 Sam is dedicating this special occasion to all his fans. "This is really for them, especially the Samsters," he says. "It's my way of saying thank you for all the support that they've given me ever since I started in show biz. They've always been there for me."

"I never really dreamed of becoming a singer or an actor," Sam declares. "Even when I was just a kid, I'd just sing or dance. I didn't expect any of these to happen but they just did. So I consider them as blessings." That's why on his 16th birthday, he is sharing these gifts with other people. "That's how blessings come," Sam continues, "by giving it back to the One who gave it to you and by sharing these talents with others."

The concert will actually feature the many facets of Sam's character and showcase what he has already achieved as an artist through the years. Sam will be singing a variety of songs that will include some singles from his album, theme songs of the TV series that he has done, contemporary, pop and novelty songs.

Expect Sam to sing his remake of "Even If," a song that is extra-special for him since this is his first carrier single and it became an instant hit with the help of his supporters. However, Sam finds it difficult to single out a song as his favorite for he listens to a wide range of genre and artists. "Sometimes you find a musical element that's beautiful in this song, and sometimes in another," Sam explains, "so I can't really pick one and say that this is my favorite." This is also reflected in the different artists that he emulates, which include Gary Valenciano, Christian Bautista, Billy Crawford, Justin Timberlake, and Michael Jackson to name a few.

Although every time Sam is asked about Cheska, he always answers, "we're really good friends." But he is quick to respond that he easily gets attracted to a girl's eyes, and he admires Cheska for that, not to mention her sweet voice and beautiful smile.


Right now, Star Magic and STAGES talent Sam is concentrating on his studies and career and love is taking the backseat. He reveals that he is not yet ready to find someone else's heart. "But if she comes my way first and knocks on my door, I'll gladly open and let her in to my heart," ends Sam with a smile.

While Sam is very busy preparing for his birthday concert, he is also busy taping scenes for I Love Betty La Fea. A second album is also in the works under Universal Records. He is also a regular in TV 5's teen drama Lipgloss and a semi-regular in ABS-CBN's ASAP '08.

On October 18, Sam will also be joined by Pinoy Dream Academy's Iñaki Ting and Bea Muñoz, 24 Beat Dancers, Fairground band and other surprise guests. I'll Find Your Heart is produced by STAGES under the musical direction of Criss Buenviaje and the direction of Audie Gemora.