Up Dharma Down turns "Bipolar" 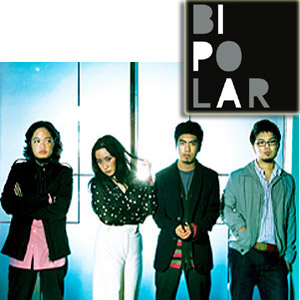 The 14-track sophomore album of Up Dharma Down titled Bipolar is available under independent label, Terno Recordings.


When Up Dharma Down released its first album titled Fragmented, it earned for them the title of "band most likely to cross over to North American shores" according to BBC Network and a feature in Time Magazine Asia. With praises such as these, it seemed quite hard to top the band's debut album.

The Hexagon Lounge at RCBC Plaza proved to be quite small a venue for Up Dharma Down's album launch last October 24. Band supporters flooded all the way out through the hallway even at the latter end of the performance. One of their guests that night was actress Meryll Soriano, the star of the band's first music video.

Everyone fell quiet as the first notes were strum on Carlos Tañada's guitar. Armi Millare (vocalist and keyboardist) and Paul Yap (bassist) joins in the melody as Ean Mayor (drummer) struck the first beat. "Blessed" is the band's track of choice to start the evening, setting the mood for a night of thought-provoking music, the kind that speaks to the soul.

And just as the audience fell into a trance, Mayor signaled the drums for a change of pace-- something more upbeat. "Every First Second," the song currently shown in local music channels, was then played. The band continued to perform the next 14 tracks from their album, ending with the last track as lingering and hauntingly sweet as the title suggests, "Sugarcoats and Heartbeats."

Bipolar includes three Tagalog tracks: "Sana," Taya," and "Silid" as well as four instrumental tracks, namely "Delayed Breathing," "Cold is Warmth," "Return, Saturn, Return," and "Furnace." There are seven other tracks "Blessed," "Clockwork," "All Year Round," "Unspoken Definites," "Two," "Every First Second," and "Sugarcoats and Heartbeats." Every track included seems to make the album worth the two-year wait.

The night's performance ended with the audience's long applause. A string of people have begun to form a queue to have their newly-purchased limited edition copy of Bipolar signed. Toti Dalmacion, the band's manager, asks everyone to move outside the venue as the air conditioning can't seem to make the lounge more breathable.

Just as everyone began to move outside, Toti emerges from the room and apologizes, "I'm sorry guys, change of plans; we can go back in again for the album signing." Nobody complains. Everybody willingly obliges, eager to congratulate the band's success in producing yet another noteworthy album. UP Dharma Down conquers the sophomore slump and lives up to the expectations of its peers, supporters and critics—giving testament as to why they deserve such high recognition.