Visayan musical extravaganza to be staged on Nov 22 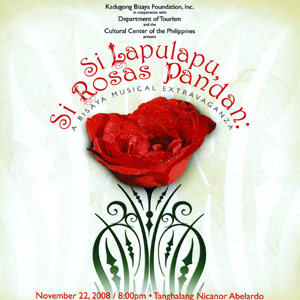 
The press conference of Si Lapulapu, Si Rosas Pandan: a Bisaya Musical Extravaganza doubled as a crash course on Visayan language and culture.


According to Baltazar Endriga, president of Kadugong Bisaya, the tinikling is not of Tagalog origin but it originated in Leyte as an imitation of the tikling bird that dodges bamboo traps set by rice farmers.

Considered to be the national dance of the Philippines, dancing the tinikling involves two people hitting bamboo poles on the ground while one or more dancers step gracefully over and in between the poles.

He also informed the press that Christmas carol, "Ang Pasko ay Sumapit," is actually a Tagalog adaptation of the Visayan "Kasadya Ning Taknaa." National Artist for Literature and Music Levi Celerio is credited for writing the lyrics in Tagalog.


Kadugong Bisaya, the national organization promoting Visayan languages, culture and the arts, will showcase the region's rich heritage by tapping well-known Visayan personalities to topbill the musical extravaganza scheduled to take place this Saturday, November 22, at the Cultural Center of the Philippines. The concert is set to start at 8 p.m. at the Tanghalang Nicanor Abelardo (Main Theater).

The star-studded event will feature performances from Verni Varga (who portrays Rosas Pandan) and Cesar Montano (who is cast as Lapulapu). Elizabeth Ramsey and her daughter Jaya will conduct the "Waray Waray" segment wherein they will be teamed up with the group Airdance. The Philippine Madrigal Singers will perform Yoyoy Villame "classics" as a tribute to the novelty singer-composer who passed away in 2007.


The director of the program is Chris Millado, who happens to be an Ilonggo himself. "We chose Lapulapu as the symbol of the warrior while Rosas Pandan evokes celebration," explains Direk Chris.

Barely a month to Christmas 2008, curtain call music will be the rousing "Kasadya Ning Taknaa," the original Bisaya Christmas carol.