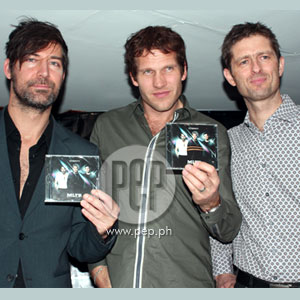 
Michael Learns To Rock returns to wow Manila as they perform tomorrow, November 22, at the Araneta Coliseum.


The popular band from Denmark--composed of Jascha Richter, Kare Wanscher and Mikkel Lentz--was responsible for a string of monster radio hits "The Actor," "Sleeping Child," "25 Minutes," "Out of the Blue," "That's Why You Go Away," "Ghost of You," and "Paint My Love," among others.


Since 1991, Michael Learns To Rock conquered the international music scene brought mainly by their brand of music which basically falls under the category of pop. What sets the band apart from other mainstream acts out there lies in their ability to craft good tunes oozing with commercial appeal.


In a press conference held last Wednesday, November 19, at the Holiday Inn in Ortigas, Pasig City, singer and chief lyricist Jascha displayed humor in discussing the essential elements of a good song.


"You got to have a chorus and a verse," he replied jokingly. Yet and despite his deadpan demeanor, it was evident that like any other hit songwriter, the practice of weaving words with melody comes of naturally thus explaining Jascha's inability to address the question in a philosophical manner.


GLOBAL SUCCESS. Michael Learns To Rock is one of the few Danish groups who have managed to make a huge impact outside their home country. Even the band members themselves expressed disbelief with their success here in Asia.


Since 1992, the band has toured extensively including Far East countries like Indonesia, Malaysia, Singapore, and the Philippines in their itinerary. As proof of the group's success in Asia, Michael Learns To Rock back in 2001 decided to release a compilation album titled 19 Love Songs in time for their 2001 five-week-long tour of Dubai, Singapore, Philippines, Thailand, Malaysia, and China. The album was launched first in Asia even before Denmark had the album available in their racks.


Aside from chart standings and record sales, the band members take pride in the fact that despite achieving global recognition as a rock unit, Michael Learns To Rock never engaged in any scandals or exploits deemed as tabloid worthy.