Cocoy Laurel's Be My Valentine concert to take place, Feb 13-14 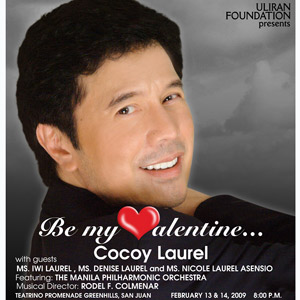 During his two-night concert titled Be My Valentine, Cocoy Laurel (in poster) will perform with his sister, Iwi, and nieces Denise Laurel and Nicole Laurel Asensio. See them perform at the Teatrino Greenhills from February 13-14, 2009.
Be My Valentine is Cocoy Laurel's latest concert at the Teatrino Greenhills. This concert for couples and singles alike is scheduled for February 13 and 14 at 8:00 in the evening. Cocoy promises a romantic evening as he sings immortal love songs with the sweeping music of the Manila Philharmonic Orchestra under the baton of music director, Rodel Colmenar. Cocoy has included his own original composition, "If I Were The Sky" in his lineup.

"I want to share more of the many gifts God has given me. He is the source of all my inspiration and I want to give back to Him these gifts as my hymns of praise," said Cocoy.

Sharing the limelight are his sister, Iwi, and nieces Denise Laurel and Nicole Laurel Asensio.

Cocoy is not new in the concert scene as in the 70's he performed in Cocoy Live at the Araneta Coliseum, Cocoy Live 2 at the Meralco Theatre, he did an all-Spanish concert, Te Quiero at the Music Museum (2000), Journeys of the Heart at the NBC Tent (2002), Cocoy Laurel in Concert at the CCP (2007) where he premiered six of his original compositions, and Cocoy Laurel at the Teatrino (2008). He was the choice of Claude Michel Schonberg to be the main soloist in The Music of Alain Boublil and Claude Michel Schonberg in Concert singing the arias of Valjean in Les Miserables and the Engineer in Miss Saigon.

Theatergoers will remember him in Repertory Philippines musicals such as The Fantastiks, Guys and Dolls, West Side Story, Camelot, Joseph and the Amazing Technicolor Dreamcoat, and Sweeney Todd. Recently, he starred in Ryan Cayabyab's Ang Mapaghimalang Birhen ng Caysasay under the direction of Nestor Torre.

One unforgettable milestone in Cocoy's life is his international exposure in Miss Saigon in London and later in Sydney where he received rave reviews in the many periodicals of Australia.

This two-night concert is produced by Uliran Foundation, Inc. to benefit the Gawad Kalinga Doy Laurel Village in Balete, Batangas.

Tickets for Be My Valentine concert are available at the Teatrino at Tel. No. 722-4501 local 116 or 723-8420 or visit www.cocoylaurel.com.
Read Next
Read More Stories About
Cocoy Laurel, concert, music
Post a Comment
Featured
Latest Stories
Trending in Summit Media Network