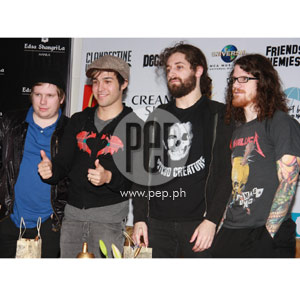 A year after rocking the Araneta Coliseum, alternative rock band Fall Out Boy returns to the Philippines to perform once again for Filipinos. They are also promoting their fifth album titled Folie a Deux.


"You should sell your Valentines to Hallmark."

If Joe Trohman (Fall Out Boy's guitarist) were to be taken seriously for every quip he blurts during the pre-concert press conference held yesterday at Edsa Shangri-la in Mandaluyong City, today's concert at the Araneta Coliseum should probably be the last place you would want to take your special someone.

But of course you've got other reasons why you must have picked the Big Dome to be your Valentine date: Pete Wentz, the charismatic bassist/lyricist—irrefutably the band's heartthrob—and scores of Fall Out Boy hits like "I'm Like A Lawyer With the Way I'm Always Trying To Get You Off (Me+You)" and the new single, the anthemic "I Don't Care."

And of course, the now-bearded, Lennonesque-hippie Trohman must be kidding—or irked—by the question posed by a media person that somehow put Fall Out Boy on a tight, sell-out spot: a Valentine-tinged concert. In a scene where the word "sell-out" means more than just selling your soul to the devil, but tantamount to losing your cred altogether, a Valentine concert must be last in the band's to-do list.

About a year ago, the quartet did their first Philippine tour, promoting their fourth official LP Infinity On High. This year, they're promoting a new one, almost exactly a year after the last one. This time it's Folie a Deux, the band's fifth—arguably most mature—album so far. But the band's chief composer/lead vocals Patrick Stump doesn't think so.

"It is not a serious album," Stump answers when asked if they think this is their most "serious" album so far. "We've done a lot more serious albums before," he continued, probably pointing to the heavily emo DVD/acoustic EP My Heart Will Always Be the B-side To My Tongue released in 2004.

The band did not openly say it as any usual pop group would, but they must have meant this concert would be really different from last year when they answered "we're better people now" and "futuristic" to the question how this concert is going to differ from the last one.

Incidentally, the brief press conference also became a platform for awarding the group a Gold record award for the new album, and a welcome party at the same time as the band was presented gifts from the show's presenters.

Each Fall Out Boy member got the infamous Baguio barrel man (you know, that wooden figurine that hides a naked Igorot inside?), and a Barong Tagalog. Stump admitted he never knew what the clothing meant for the country before it was explained to them yesterday, even as he has seen it before, having a part-Filipina girlfriend.

About 30 minutes before Fall Out Boy got to the pressroom, their opening act for the concert, Hey Monday, answered questions from the press. The young group of five were quick to encourage the media to throw their questions even as the startled writers found themselves asking among themselves who these kids are. Apparently, they're Wentz's new find. As a co-label owner of record label Decaydance, Wentz was chiefly responsible for signing acts like Panic At the Disco, Gym Class Heroes and The Academy Is, and has had his own share of success as a talent finder. Stump, as openly discussed during the press con, is a resident producer of Wentz's label.

And now, it appears Wentz is planning to bring his clothing line to the Philippines, too.

"We're thinking about it," Wentz says consulting Stump for the possibility of bringing his clothing line in the country for their fans. "And maybe Patrick could man the store," he jokes.

One of the members of Hey Monday managed to sneak to the mic in the middle of the room to throw some questions (probably inside jokes) at Wentz. But the bassist was quick to dismiss the prank with a "get out of here": "Are you gonna take all of their time now?" referring to the press who were still waiting for another round of questions.

If the inside jokes and smarts are to continue to the concert today, it must be just like Hey Monday says it would be: a fun concert that everybody could enjoy.

And Stump doesn't mind the wisecracks, even the pointy questions. Asked if he admits to sound like the previous bands he has had to produce lately, he escapes with: "We're all germinating in one place, it makes sense to sound alike."

And maybe that's also good news for Fall Out Boy fans, because if Hey Monday says they have been listening to Fall Out Boy since they were kids, it should be one hell of a solid concert.