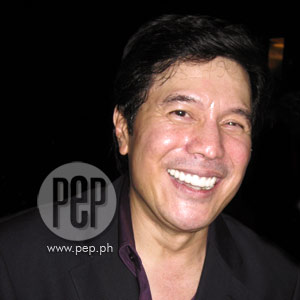 Cocoy Laurel serenaded audiences again with his two-night Valentine concert recently held at Teatrino, Greenhills. He reveals that he had an ulcer operation two years ago that prevented him from being active in the concert scene.


"Thank you very much for coming. I can feel your love and the next songs will be dedicated to all of you," ito ang pambungad na spiel ni Victor "Cocoy" Laurel pagkatapos nitong kantahin ang kanyang opening number na "My Funny Valentine."

Sa kanyang Valentine concert sa Teatrino noong February 13, kinanta rin niya ang standard at classical songs like "Can't Take My Eyes Off You," "Embraceable You," "Someone To Watch Over Me," "You Make Me Feel So Young," "What A Wonderful World," "New York, New York," "Some Enchanted Evening," "Night And Day," "I Got You Under My Skin" and "The Way You Look Tonight."

For the encore number, Cocoy sung the theme song of his first movie with Nora Aunor, "Lollipos and Roses" which brought back memories for some of the Nora-Cocoy fans who were there to watch the concert. Matatandaang nagkasama noon ang Superstar at si Cocoy sa 1971 film na Lollipops and Roses.

And the last song was taken from The Man From La Mancha's "Impossible Dream."

We had a brief interview with Cocoy Laurel after the hour-and-a-half showcase of love songs. Ayon sa kanya, he underwent a major operation due to ulcer. "Actually, this is my second life because almost two years ago, after that concert two years ago, I didn't know that I had an ulcer. It exploded and thay had to operate on me and I almost didn't make it in the operating room. I know this is my second chance that's why I'm doing this concert because I want to reach out and say thank you. To share the love to the world.

"I think I got my illness due to stress. I think, when you don't eat on time or eat well. Well, siguro napabayaan ko rin ang sarili. So, that's what happened, there was a hole na pala sa tiyan ko. Wala naman akong nararamdman except for the time na ooperahan na pala ako, I could hardly breathe."

"Praise the Lord, I'm here. And so, I plan to continue doing concerts and recordings to share the gift that God has given to me. That's why we are here."

So, how are you now with Nora Aunor, ang kanyang contemporary noong 1970s? "You know, I'm still her avid fan, a very avid fan up to now. And I really admire her a lot. She's a golden person with a golden heart, a legend to me. I think there is a reason why God put me together with her on the first film and she was a wondefful blessing to me."

The night was really a night of love songs and you could feel the love filling the Teatrino, Promenade in Greenhills last February 13. How could you stop the love pouring in when The Manila Philharmonic Orchestra under the baton of Rodel F. Colmenar provided the musical accompaniment sa mga magagandang awitin nina Cocoy, Iwi, Denise at Nicole.