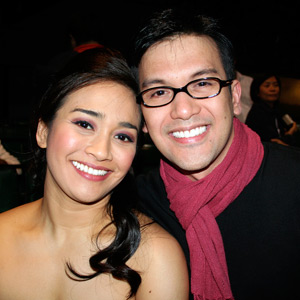 Joanna's Saturday night concert was packed, and everybody cheered when she came out on stage and warmed up the evening with "Something's Comin'" and "Tonight" from West Side Story, and "Seasons of Love" from Rent. (Click HERE to read a review on Joanna's performance as Maria in West Side Story.)

Joanna told the audience that it was her first time to perform without a mask. "People always see me on stage as a character. But tonight, I'll just be myself."

When Joanna was 17 years old, her classmate told her about Miss Saigon auditions. She said in her spiel how she loved going to auditions especially since Miss Saigon was known for its rigid and tough auditions. "At first, I really couldn't believe that I got the role of Kim. It was not until the opening night that it hit me."


She then demonstrated her vocal power through a series of showstopping songs from three of the many musicals that she has done throughout her career. Joanna performed "Movie in my Mind" and "Sun and Moon" from Miss Saigon, "I Don't Know How to Love Him" from Jesus Christ Superstar, and "On My Own" and "I Dreamed a Dream" from Les Miserables, which she performed for the Queen of England. The sequence ended with a loud applause from the crowd.

Joanna also shared how she loved to sing Filipino songs and it's very rare that she gets the chance to sing them. She took this opportunity to serenade the audience with some of her favorite OPMs (Original Pinoy Music). These included "Yakap sa Dilim," "Mamang Sorbetero," "Limang Dipang Tao," and "Hanggang."

But the bigger treat for the audience was when Joanna's special guest Franco Laurel joined her on stage to sing some duets. They had some sort of a showdown in the song "Anything You Can Do," while they went romantic in "They Can't Take That Away from Me" and "I've Got a Crush on You."


CRUSH ON MR. SHADES. The night was not just about nice surprises but also about some revelations. Joanna disclosed that she had a huge crush on Randy Santiago, and that she had her share of love stories in all their complexities.

"I have experienced all sorts of love," Joanna said, "from puppy love to can't-live-without-you love to unrequited love and even the I'm-sorry-I-didn't-know you-were-gay love." The audience laughed but Joanna confirmed, "I once fell in love with a beautiful man but I didn't know that he was also into beautiful men." Joanna also revealed that she was once married but the relationship did not work out. Then she segued to singing "There's a Fine Fine Line" from Avenue Q, and "Someone That I Used to Love."

Joanna's concert ended with her singing another set of showstoppers, which were actually songs of the characters that she dreams of playing someday. These included "As If We Never Said Goodbye" from Sunset Boulevard, "Think of Me" from Phantom of the Opera, "Listen" from Dreamgirls, and "Defying Gravity" from Wicked.

Joanna's final song "Home" was very special and meaningful to her. "I love to be home again," she said. "'Home' is actually my anthem abroad and it's really close to my heart." When Joanna left the stage, the audience couldn't seem to have enough of her and requested an encore.

Joanna did not fail her viewers and performed one more song dedicated to her subject of affection Marc Vastenavondt who is in London. "Even if my special someone is waiting for me in London, I'm very happy to share this wonderful occasion with all of you," Joanna closed after singing "The Promise."