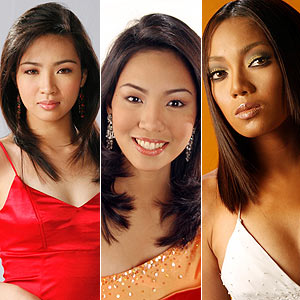 This concert comes on the heels of La Diva's previous appearance in Los Angeles last December for the Let's Celebrate: Marian-Dingdong Dance Concert at the Virgil Auditorium.

The three young divas perform regularly on GMA-7's Sunday concert variety show SOP. They are grateful for the support that they received after they won in the singing contest of the Kapuso Network. Jonalyn, Maricris and Aicelle are very excited to return to the U.S. after performing last year for the launching of GMA Pinoy TV.

It will be remembered that Jonalyn Viray was the first champion of Pinoy Pop Superstar in 2005. When she competed at the World Championships of Performing Arts in Hollywood, she earned five Gold trophies in the Senior Vocal Division for the following categories: Broadway, Original, Pop, R&b/Jazz and Variety Industry Award as Vocal Solo Champion.

Aicelle Santos won as first runner-up in the second season the GMA-7 talent search Pinoy Pop Superstar. She was hailed as the "Undefeated Superstar" for winning eight straight weeks. She has proven her singing prowess by bagging the Best Performance of Own Country Song while representing the Philippines in the 2006 Astana Music Festival in Kazakhstan.

Locally, Aicelle is fast gaining popularity as her numerous awards affirm. She was named the People's Choice Best New Female Artist in Awit Awards 2007 and the Most Promising Female Singer of 2008 at the Guillermo Mendoza Awards. During the 21st Awit Awards last November 2008, she was also the People's Choice for Best Female Recording Artist.