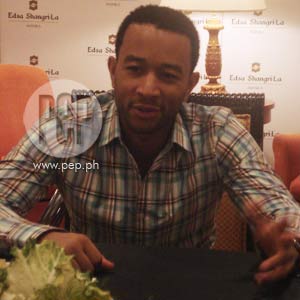 
Yesterday, March 26, PEP (Philippine Entertainment Portal) was able to attend the press conference of John Legend at the EDSA Shangri-La Hotel. Considered to be one of the most popular R&B singer-songwriters of this generation, Legend just arrived that morning in Manila to conduct his first live concert in the Philippines. John Legend's Manila leg of his Evolver World Tour was held last night at the Araneta Coliseum in Cubao, Quezon City.

How does it feel to be in Manila?

"It feels good, the first time here. A lot warmer than Europe was. And everyone's been so friendly since we got here. And I am very much looking forward to the show tonight."

So what can fans expect from his one-night concert?

"Best show of their lives [laughs]. No, it's gonna be fun tonight, it's gonna be a lot energy, it's gonna be about my full band with me. And we're gonna give everybody a great show. We'll play songs from all three albums, and a couple of cover songs, and it's a very soulful and energetic show."

According to Legend, among his favorite songs in his current album Evolver are "Everybody Knows," "Cross the line," and "I Love, You Love."

How is Evolver different his last album?

"Uhm, this album, compared to Once Again, this one's a bit more up-tempo, the sounds are different, the choice of instruments, this one's more electronic, sounds more pop. The previous one was very vintage, and classic.

"Those are different times in my life, and different moods. So, you know, it feels different. Every album takes on a life of its own, and a personality of its own."

PEP asked more about his inspiration for his song "Cross the Line."

"I think every guy knows that story where there's a girl that they are friends with, and might wanna be more than friends. Maybe girls know the same story the other way around, too.

"Yes, it happens to all of us," said a member of the press amidst the laughter in the room.

John Legend has popularized hits such as "Ordinary People," "Used to Love You," "So High," "Save Room," "Heaven," and "Green Light." He said that it really depends on the people if a song will be a hit or not.

According to Legend, "Green Light" is the biggest hit of his career so far. It is his third biggest hit in the U.K. and his first top forty single since "Ordinary People." The song is also his second top 40 hit in U.S. The song features Andre 3000 of OutKast.

Aside from Andre 3000, Legend experienced working with Kanye West, Brandy, and Estelle, as well. He admits that those people are people he's a fan of, and people he respects as musicians and entertainers. "And I was very honored to work with each of them," he declared.

Legend started working with Kanye West since 2001. They worked on many many tracks together.

"I respect him tremendously, and I think he is one of the most important artists of our generation. Whenever I get a chance to work with him is always a privilege. We only did one song together in this album, but we'll continue to work together over the years.

"He's also a good adviser for me. He listens to my tracks, and let me know what he thinks. It's always helpful to get his critiques and advice."

Legend reveals that this is the first time he has worked with Andre 3000. "It was a lot of fun having him on the set. He's really a genius, and he's one of the coolest artists that I can think of."

Legend admits that Lil'Wayne, Beyonce, and Amy Whitehouse are among the few artists he wants to try working with.

ON HIS HUMANITARIAN AWARD. John Legend previously received a Humanitarian Award for the "Show Me Campaign."

"The Show Me Campaign is a campaign that seeks to fight poverty by raising funds to assist people who are living in poverty, by educating people around the world about the issues that we face globally," he described.

Other than being part of fighting poverty, Legend had been involved in other charity events like fighting cancer. He also became part of Barack Obama's campaign for presidency.

How important is it for artists to support advocacies and speak up?

"I think it's up to every artist how they wanna use their name and use their influence. I know that, for me, I read a lot about what's going on in the world, particularly in politics. But every artist has to do decide because when you use your name and attach it to something, it has an impact on you; on how people receive you, on how people perceive you. And you have to make a choice about whether or not you wanna put yourself out there."

How does John apply his political inclination to his music?

"It is not always integrated. I've written songs that were very integrated with my political beliefs, like if you're out there, on this album. But there are times that I just want to write about love and romance, and relationship, and friendship, and things like that.

"And I think music, sometimes is supposed to be about escaping the realities of the world."

Since most of Legend's songs are about relationships, PEP tried to ask him if these are based on his experiences.

"Some of them, not all of them. I reserved the right to make things up sometimes. [laughs]"

What does he love most about touring?

"The best part of the day is when I'm on stage. I love it. I love hearing the crowd. I love seeing their faces light up when I come out, and when they sing along to the songs. I love the energy that we exchange. It feels good."

What is his message to the Filipinos, especially to the current generation of music lovers?

The first time he made a demo trying to a have a record deal was way back in 1999. He was signed up with a record label in 2004. Legend admits that during those five years, he got rejected by a lot of recording companies quite a few times, including his current record label.

How much did he compromise as an artist from 1999 until the time he had his record deal?

"It wasn't about compromising. It was about really getting better. It was insane. This is me, and I change me to fit something else. I feel like, what I really was, was trying to find what me really was. So, you know, trying to find a sound that fit me the best. And I'm still trying to find it in each album. It changes to some degree. The core of me is always gonna be the same. But some of the music, and some of the choices I make will be different in each album. But they feel right for me at that time, because that's where I am in my head at that time."