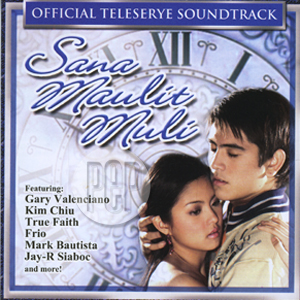 Teen stars Kim Chiu and Gerald Anderson defied fate and time in the name of love in ABS-CBN's hit teleserye Sana Maulit Muli. Now, Star Records invites everyone to experience the immense power of love through romantic music with the release of Sana Maulit Muli, the official teleserye soundtrack.

Leading the list of the official teleserye soundtrack album is Gary Valenciano's new rendition of his signature hit "Sana Maulit Muli," the main theme song of the series.

This new rendition is warmer, more passionate, and definitely matches the mood of the popular teleserye. Gary Valenciano never fails to put listeners to his music swoon, and this song is no exception. I think that people won't mind hearing this song again and again.

Kim Chiu successfully showcases her singing ability with her rendition of "Mine." She plays her tune smoothly, sticking to the low notes. Nicely done.

The Cebuanos really know how to put the "love" in love songs, especially in the classic "Matud Nila," passionately interpreted by Mark Bautista. The tune and the way Mark sang the song has a Spanish influence, making it the perfect harana song.

Pinoy Dream Academy scholars Jay-R Siaboc and Panky Trinidad dish out their voices in "Kung Maibabalik Ko Lang" and "Time after Time," respectivlely. Jay-R's voice is exceptionally strong, without losing too much pitch. Panky, on the other hand, made me think of Lou Bonnevie. This person sings with the serenity and conviction present in the song.