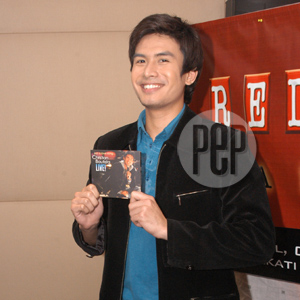 To celebrate their first anniversary as a couple last February, Christian Bautista and girlfriend Rachelle Ann Go (not pictured) spent a day in Subic. They tried parasailing and riding a banana boat.

Warner Music Philippines has announced that Christian Bautista will be given the Gold Record Award during the March 11 episode of ASAP ‘07 for his live album, which sold 15,000 copies.

"It feels good even though we just launched the album two months ago," confides Christian during an intimate gathering for the press last night, March 8, at Red Box, Greenbelt 3 in Makati City.

Another surprise for Christian is the fact that his version of "Got to Believe in Magic" has been chosen as the theme song of the Kapamilya network's newest Koreanovela, Something About 1 %. "I haven't watched it [Something About 1 %]yet, kasi it's aired before ASAP and nagre-rehearse kami," admits the 25-year old balladeer. "Bagay nga yung song kasi you don't know...love can just happen."

On Sunday, he will also be launching his version of "Got to Believe in Magic," which is the second single culled from his live album.

Asia's Pop Idol recorded his third album, Just a Love Song...Christian Bautista Live!, before all-female audience at Teatrino, Promenade, Greenhills. He says of the experience, "Masaya. When you sing live, you have more adrenaline. Merong X factor compared to a studio album." A five-piece band, a five-piece strings section and a grand concert piano accompanied Christian during the recording.

Right on the heels of his four-city tour in Indonesia, and his Valentine concert with real-life sweetheart and singer Rachelle Ann Go, Christian is geared up to actively promote his latest album as well as his upcoming concerts. "I will be having my second solo concert at the Araneta Coliseum on April 28. I also have a U.S. tour with Rachelle on April."

Christian tells PEP (Philippine Entertainment Portal) the pros and cons of performing with his girlfriend. "When you sing love songs to each other, you really mean it. ‘Pag heartbreak songs, mas masakit kasi iniisip mo. [Performing together] intensifies the numbers."

Even though he is best known for his ballads, Christian is willing to step out of his comfort zone. "For core fans, kung ano yung first hit mo, it should somehow sound like that. Kung may experimental songs, probably one or two songs-not the whole album." He also admits that he would want to be in a band but he has come to realize that his voice is more suited to ballads.

When asked to react on reports that his tandem with Rachelle is causing the lackluster in the tandem of Nyoy Volante and Nina, the balladeer chooses his words carefully. "How do I say this? I think iba kami. They're more of...mas pang live performances and mas [pang] gig circuit sila. Kami naman, mas madalas sa TV. Di naman namin napag-uusapan yun. They're very talented and connect very well. Iba lang ang packaging."

A DVD of Just a Love Song...Christian Bautista Live! will be available in the market soon. The 19-track album contains classic love song covers including its carrier track "Trying to Get the Feeling Again," which was popularized by music composer-singer Barry Manilow.