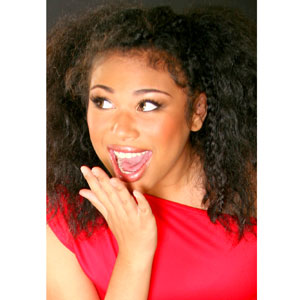 After performing in Hollywood, California during the 2008 WCOPA, Fil-Am singer Rachel Razon caught the attention of executives from Upscale Records. Now, she is slated to do a music demo collaboration with the California-based company.
ORANGE COUNTY, CALIFORNIA—Manny Mijares of Upscale Records & Talent Management recently welcomed Philippine-based teen singer Rachel Razon to Southern California for a music demo collaboration. Upscale Records is strongly affiliated with dignitaries in the American music industry, ranging from Geffen/Interscope Records to JRecords and 19th Entertainment.

Mr. Mijares, recognized not only for his accomplishment as an executive of Upscale Records but for being on the Grammy Board and part of Recording Academy, brought in highly noted professionals to team up for Rachel's project. Among the team included Katie Morris (singer/songwriter who just finished writing and touring with the Pussycat Dolls and Lady GaGa), Wes Geer (songwriter/producer/guitarist formerly with Jive Records and whose music has been featured in numerous soundtracks for film and TV), and Steph Jones (R&B singer/songwriter/former Ford Model known for his collaborations with Chingy and Ludacris while under Def Jam Records, and currently out with his solo album Mr. Ordinary.

Rachel is a 14-year old Filipino-American singer who was chosen in 2008 as one of the junior delegates for the World Championships of Performing Arts (WCOPA) Team Philippines by director Carlo Orosa and STAGES Talent Group. She successfully became one of the Junior Grand Finalists from the Philippines along with fellow delegates Catherine Loria (2008 Junior Grand Champion Performer of the World) and Tippy Dos Santos.

Rachel's outstanding fervor for music brought her to Hollywood, California for WCOPA, where her voice, stage presence, and personal style stood out for the executives of Upscale Records, giving her the opportunity to meet Mr. Mijares for the first time.

"Throughout the week-long competition, Rachel impressed Upscale Records executives who were there to find someone with that marketing 'It' factor. She has the voice, look and international appeal that we were looking for and to top it off, she is young with great potential. Upscale is truly expectant in giving Rachel the proper means, tools and opportunities to run far with her music," said Mr. Mijares.

He added: "Rachel's musical style is a mix of today's music. Her vocal talent during our studio sessions was impressive and undeniable. She has the edge of a Lady GaGa and the soulfulness of a young pop/R&B diva. Upscale Records will be handling her music in the US, and is excited to market her soon to major labels."

Rachel was born in Florida, USA and moved to the Philippines in 2005. She started as a stage performer at an early age, and had begun her singing career in Florida's touring groups such as Entertainment Revue, Radio Disney and Clubhouse Kids. In the Philippines, Rachel is a performer for Trumpets Playshop Teens and currently attends International School Manila.

For press information, contact Caydin Sanders in the US at csanders@upscalerecording.com and Oliver Oliveros in the Philippines at stages_pr@i-manila.com.ph.
Read Next
Read More Stories About
Stages, music
Post a Comment
Featured
Latest Stories
Trending in Summit Media Network