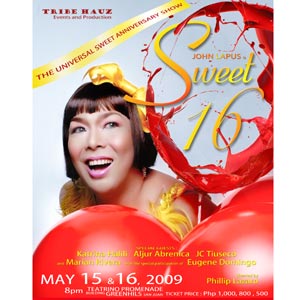 Eight lucky PEPsters have the chance to win two tickets to the anniversary show of John Lapus titled Sweet 16 The Universal Sweet Anniversary Show. The two-day event will be held at Teatrino, Greenhills on May 15-16, 2009. Click HERE to join the PEP ID promo.

John "Sweet" Lapus has come a long way since his first comedy show at The Library way back in 1998.

Sweet 16 The Universal Sweet Anniversary Show will be his last solo show for some time. In an interview with PEP editor Rommel Llanes, Sweet reveals that his next solo show will be for his 20th or 25th anniversary in showbiz. He admits that having a major solo show is very difficult since he is currently one of the main hosts of the GMA-7 showbiz talk show Showbiz Central as well as a cast member of the upcoming dramedy Adik Sa 'Yo.

For this reason, the TV host-actor promises that this will be his best show yet. Sweet is thankful to his home network, GMA-7, for the support that they are giving for Sweet 16. He is also greatful for his fellow Kapuso stars for granting his request to guest in the two-day event. Sweet would also like to thank ABS-CBN Interactive for the support even though he is part of the Kapuso Network already.

Sweet will open the show with a hit Broadway musical song that he says best summarizes his 16-year career in the local entertainment scene.

He will also do a sexy swimsuit showdown with Katrina Halili and a dance showdown with Marian Rivera. Aljur Abrenica and JC Tiuseco meanwhile will serenade Sweet through a Pinoy harana segment that would definitely delight audiences.

The show is directed by Sweet's friend and fellow stand up comedian Phillip Lazaro.


Guests: Katrina Halili and Aljur Abrenica (May 15)
JC Tiuseco and Marian Rivera (May 16)
with the special participation of Eugene Domingo


It is the first time that Sweet would do a two-day show to accomodate more people since Teatrino has a seating capacity of only 300. Get your tickets now at Teatrino, Hairwatch Salon or call 0905-3029890 or 0927-7515726 for reservations.


PEP PROMO. Eight lucky PEPsters will have the chance to win two (2) tickets each for Sweet 16. Deadline for submission of entries is on Monday, May 11, at 5:00 pm.