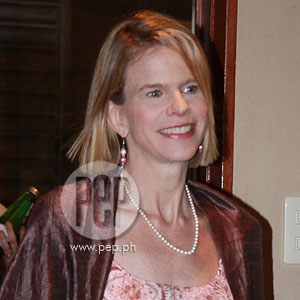 "You guys are a really musical country, as you know, and you have great singers here. Maybe it’s the weather around here that makes you so laid back," says Kevyn Lettau about Filipinos. She will perform live this Wednesday, May 6, at SM City North EDSA's The Block and on May 7 at SM Megamall's Main Mall Atrium.


Kevyn Lettau has visited the Philippines so many times, she now hopes to get a Philippine passport.

When she was interviewed by the Philippine media yesterday, May 4, in Discovery Suites in Pasig City, someone suggested that she marry a Filipino to get the coveted document.

"You never know...you never know what is the plan," says the German-born American jazz singer in response to the reporter's suggestion, while looking up as if asking for a sign from heaven.

Kevyn has just been separated from her husband of many years, Michael Shapiro. "Michael was more than just my husband. He was my manager, my album producer... and it's the first time that I made an album without him as my producer."

After three years, Kevyn comes out with an album titled What Is Enough?, a 12-track collection of original and cover songs. Kevyn and long-time collaborator and guitarist Peter Sprague produced the album, which is now being distributed by Sony Music Entertainment Philippines.

"Peter and I have played music together for over 30 years. Our first group was called the Dance of the Universe Orchestra and we made a recording entitled 'You Make Me Wanna Sing'that really stirred things up for us in San Diego [California]. This led to may concerts and other recording deals that embraced our definition of jazz which included jazz standards along with our love for Brazilian music. With the release of What is Enough?, we reunited after many a moon to explore the sound of just guitar and voice," Kevyn explains.

The jazz singer best remembered for her 1992 smash hit "Sunlight" says making her latest album was both a liberating experience and a discovery for her. "I discovered that I'm a lot more courageous than I thought I was. This is the first recording I've done without my ex-husband producing [Michael Shapiro produced all her records prior to this album] and this is the first record that I did by myself. And I started to discover really what my opinions are and what my taste is.

"Making an album of duets is not an easy thing to do because there's nothing to hide behind. When you have a whole band, there are layers and layers of things. There's the synthesizers, and the drums and all the different reverbs, and backgrounds and this and that. Now when it's a duo and it's just the two of us playing, and that's all you have and that's it. So every little note, every little nuance, every breath, every word that maybe you don't pronounce right, everything is right there. It's not going away."

Contrary to what others may think about her having a hard time producing her own album, Kevyn says she found the whole thing quite easy and at the same time a learning experience for her, too.

"I learned a lot of technical things about my voice, about how maybe I need to hold certain notes a little bit differently, or maybe using too much vibrato in spots... I learned some technical things that I haven't been aware of before," says Kevyn.

Kevyn began her singing career at the tender age of 17 when she started singing jazz, R&B and Brazilian tunes in San Diego, California. She got her real big break when she became a singer for the legendary Brazilian jazz artist Sergio Mendes. She started touring with Mendes's band for eight years and developed her own vocal style along the way.

Kevyn went solo in 1990 and her first two solo releases were Kevyn Lettau (1991) and Braziljazz (1995). They led to critical acclaim and a loyal following both in the U.S. and abroad, particularly in Japan and here in the Philippines. After her song "Sunlight" became a hit locally, she did shows in different parts of the country and did some product endorsements and print ads.


LIVE PERFORMANCES. "This is my 10th time here, and I'm always happy to come back here," enthuses Kevyn. Her last big concert was at the Araneta Coliseum four years ago. She performed at the Discovery Shores in Boracay last Saturday, May 2 and had a show tonight, May 5, at the SM Mall of Asia Main Mall Atrium. This Wednesday, May 6, she will perform at SM City North EDSA's The Block and at SM Megamall's Main Mall Atrium on May 7.

Kevyn says she likes coming back to the Philippines, which she considers her home away from home. But what really keeps her coming back here are the Filipinos.

She had her first taste of Filipino love when a jazz pianist named Toti Fuentes invited her to play in a little Filipino restaurant here. "It pays, whatever...30 bucks and a swordfish, and I said, ‘Great!' So I went there and we started playing Sergio Mendes songs."

The place, she said was really small but was really packed. "It was like a long closet. It fit maybe 30 people and there were probably 50 people in there. It was packed. And I'm singing these Sergio Mendes songs and these jazz tunes and everyone was with me...singing along. After a while standing up and they went into the kitchen and they got pots and pans and I was like... ‘What?! What is going on?'

"I hate to generalize, but you guys have a combination of...naivity, this childlike quality, this purity about you...that it doesn't matter if you're living in the streets or if you're the wealthiest person living in Manila. You, guys, all have that," says Kevyn with a smile.


Click HERE to watch a video of Kevyn Lettau during her recent press conference in the Philippines.