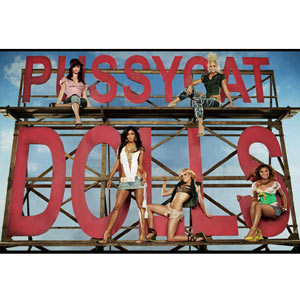 A Clear Doll Domination: The Pussycat Dolls Live in Manila will take place at the SM Mall of Asia Concert Grounds on June 11, 2009.


The American pop girl group and dance ensemble will invade Manila on June 11, 2009 for a night of spine-tingling performance. Watch A Clear Doll Domination: The Pussycat Dolls Live in Manila at the SM Mall of Asia Concert Grounds.

The group behind the world hit songs, "Don't Cha," "Buttons," "Stickwitu," "I Don't Need A Man," "Beep," "Wait a Minute" will soon perform their new hits from their latest album Doll Domination. It contains chart-topping hits like "When I Grow Up," "I Hate This Part," "Whatcha Think About That," and the English version of Slumdog Millionaire's end credits song, "Jai Ho" (You are my Destiny).

The Pussycat Dolls (PCD) started out in 1995 as a burlesque troupe in California founded by choreographer Robin Antin. During that time, the PCD performed with several guest vocalists with a repertoire of the 1950s and 1960s pop standards while wearing old-fashioned pin-up costumes.

Eight years later, Antin sealed a deal with Interscope Records and the group was recreated as a music group headed by the lead singer Nicole Scherzinger and soprano Melody Thornton to complete the shift into a pop group. They joined Jessica Sutta, Ashley Roberts, Kimberly Watt and Carmit Bachar who left the group in early 2008.

Nicole, the lead singer of the group, was born in Honolulu to a Filipino father and Russian/Hawaiian mother.

In 2005, they released their debut album, PCD, debuting at number five on the Billboard 200. Their carrier single, "Don't Cha," was a worldwide hit ranking number one in multiple countries including UK, Australia, and Canada. Their ballad, "Stickwitu" was another hit in the United States selling over three million digital downloads and CDs worldwide. It earned them a Grammy Award nomination.

Three years after their first album, PCD released their second album Doll Domination in September 2008, which included "When I Grow Up," also a worldwide hit.

The second album debuted at number four on the Billboard 200 with 79,000 copies sold in its first week.

This is the second time for Pussycat Dolls to perform in Manila. Their first concert was in the Araneta Coliseum in 2006 as part of their first worldwide tour.


Be dominated by the hottest girl group in the world! Doncha miss out on The Pussycat Dolls experience with Nicole and the rest of the Dolls on June 11, 2009.