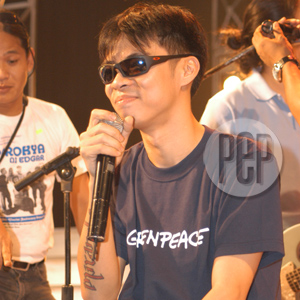 The song "Bagsakan" of the band Parokya ni Edgar was used as the basis of senatorial candidate Francis "Kiko" Pangilinan's campaign jingle. Instead of using the lines Nandito na si Chito, it was changed into Nandito na si Kiko...

Unless you've been in a coma for the last few months and have just snapped out of it (in which case thank you, for the first thing you did out of oblivion was look for this blog?!), you know that it's election time again here in the Philippines. The confetti-laden rallies, the ubiquitous posters and those jingles—those annoying, hook-laden, ear-splitting and ultimately, memorable jingles, are on the air again. Don't we just love to hate them?

Not a week goes by that your favorite daily isn't sent an angry letter by an equally angry newsreader about how the jingles accompanying our wanna be public servants are so much intellectual cotton candy, bereft of any depth and real information about our candidates. For us music composers, however, these hard-fought periods of political campaigning can represent a financial windfall. From unknown talents honing their craft on the local barangay captain's musical plea for votes, to experienced tunesmiths like Lito Camo, it's an exciting flurry of productivity in the music scene!

Now, I'm not gonna sit here and lie to you. In-depth, hard information about our candidates is the first, most important thing these public servants should offer up. But like most anything being peddled in 30-second snippets on your favorite TV show, politicians are essentially products vying for your attention, and your precious votes. Short, memorable, and to the point—that's all you can realistically get in a half-minute.

Let me take this opportunity to thank the Heavens that rock music has transcended the stigma it used to have among parents and "The Establishment." We advertising music composers often use soundtracks inspired by rock songs when we score commercials—it's no different for political jingles. Songs for huge popular rock artists such as Parokya ni Edgar and Sandwich are being tapped for senators' campaigns, and it's a reflection of the clean living that these artists exude image-wise, despite the fact that their music rocks as hard as anything out there.

Ask your favorite uncle—you know, the one who swears he saw Maria Cafra perform live back in the ‘70s (don't we all have one of those?) and he'll tell you kids these days have it great, kids these days have it easy. Listening to Juan de la Cruz back then, they'll tell you, was about as taboo as you could get, while nowadays proud parents beam at their kids' power chords and distortion-driven lead guitar lines. It seems trivial, but to me, this has been huge. Something like Sugod anchoring a "respectable" campaign? Who would have thought?

So the next time one of these jingles starts blaring away at your sanity, take a second to think of the composer while you wince! For these next few weeks at least, there's food on his or her table!

God bless, everyone! Thanks for reading!