Doll Domination will take place in Manila on June 11 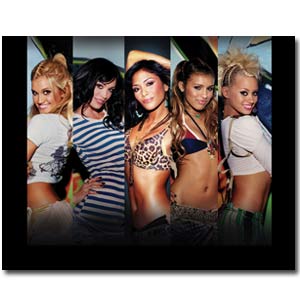 Watch the Pussycat Dolls live at the Mall of Asia Concert grounds on June 11, 2009.
Clear and MTV Philippines bring you A Clear Doll Domination: The Pussycat Dolls Live in Manila. This one-night concert will take place on June 11 at the Mall of Asia Concert grounds. Let them take the hotness meter a notch hotter as you witness the Dolls' moves live once again. This is going to be 2009's sexiest concert!


PUSSYCAT DOLLS BIOGRAPHY. In 1995, the Pussycat Dolls started out as an all-female burlesque flavored revue that gave young Hollywood starlets a chance to be in pin-up costumes dancing to 1950's pop standards. Ten years after, the group morphed into full-fledged pop icons that everyone one wants to be. While each of the six group members is a bonafide hottie singer and dancer, the breakout of the group is lead singer Nicole Scherzinger. With Nicole as the group's front liner, PCD flooded the airwaves with their hits "Don't Cha," "Stickwitu," "When I Grow Up," "I Hate This Part," and their latest pop anthem "Jai Ho."

As headliners back in 2006, Pussycat Dolls packed the Araneta Coliseum with their adoring fans that just can't get enough of them. And now, on their tour for the Doll Domination album, out now from MCA Music, the Dolls are back with much more intensity this June 11!

"My Name is Nicole." Who can forget this line? Nicole Scherzinger, the PCD's sexy half-Filipina lead singer, was recently seen all over Philippine television as Clear's newest global endorser. Nicole epitomizes the Clear woman with her world-class vocals and sexy dance moves. Her confidence, power and charisma shines through in each performance. And to look her sexy best, Nicole's one and only shampoo of choice is Clear! Nicole chooses Clear as it keeps dandruff away and gives her up to 4x softer hair, unlike other anti-dandruff shampoos, which made her hair dry. With Clear, Nicole's hair is soft and dandruff-free, ready for every breakthrough performance.

Best of all, Clear gives you a chance to watch the Dolls' extravaganza on great discounts with their Pussycat Dolls Early Bird Ticket Promo. Avail of up to 50% off your tickets from May 1 to 31 by buying one (1) 200mL Clear Bottle to purchase 1 Pussycat Doll concert ticket at any SM Supermarket! Present the Clear Proof of Purchase at any TicketNet or TicketWorld outlets and get your Gold ticket for only P3,000.00, Silver ticket for P1,400.00 and General Admission ticket for P300 (prices do not include 3% service charge). Regular prices (Gold P5,000; Silver P2,800 and General Admission P500 - plus 3% service charge).

For tickets, call TicketNet at 911-5555 or TicketWorld at 891-9999. For more info on this promo, visit www.clear.com.ph. Be dominated by the hottest girl group in the world! Doncha miss out on The Pussycat Dolls experience with Nicole and the rest of the Dolls!