Dream Big Productions to have a U.S. tour this April 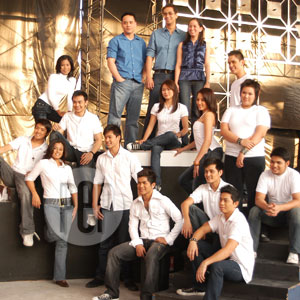 
Pinoy Dream Academy's top six scholars will have their first U.S. Tour starting April 7. On each day of their tour, one of the members of the Dream Big talents will join their performance.

Also joining the team are RJ Jimenez, Iya Ginez, and Kristoff Abrenica. These three scholars weren't able to make it to the top ten, but were still included in the dream team by director Lauren Dyogi.

Direk Dyogi explained that Dream Big would serve as a stepping-stone for its talents.

He explained, "Dream Big production is an extension of Pinoy Dream Academy and [Pinoy] Big Brother. So more or less, it's a transition unit wherein we handle muna the kids until.... About a year or two that we have them, we take care of their career, start off their career, 'tapos kapag okay na sila, then, we transfer them to Star Magic."

PEP (Philippine Entertainment Portal) asked Direk Dyogi, during a photo shoot with the talents of Dream Big, why they decided to include other members who did not make it to the top ten. He said, "Si RJ, noong naga-audition 'yan, naniniwala talaga ako sa kakayahan niya. Si Iya naman is really a good sultry singer parang iba 'yong nao-offer niyang kind of music. Si Kristoff naman is more on the artista side, but since galing siya sa PDA sinama na rin namin siya."

Meanwhile, the U.S. Tour will kick off at San Francisco on April 7. Then, on April 8 in Los Angeles, California, April 13 in Chicago, April 14 in New York, April 15 in Atlantic City, April 20 in Las Vegas and April 21 in San Diego.

According to Direk Dyogi, the tour is mainly for the top six scholars—Yeng, Ronnie, Jay-R, Panky, Irish and Chad. However, the member of Dream Big talents who will guest on the show is not yet definite.