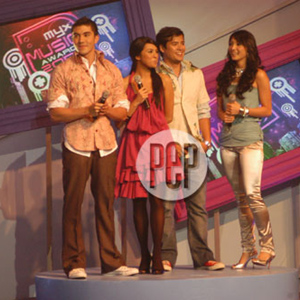 "We are part of the history of music," declared MYX VJ Luis Manzano (leftmost) during the 2nd MYX Music Awards held last March 15 at the Armed Forces of the Philippines Theater in Camp Aguinaldo. MYX VJs (L-R) Luis, Nikki Gil, Geoff Eigenmann, and Iya Villania hosted the awards night, which had a total of nineteen categories. The nominees were selected from all the music videos aired on MYX from January 1, 2006, to December 31, 2006.

"In behalf of the music scene, I would like to thank MYX for supporting artists—whether indie or mainstream," said a grateful Ysmael Yuzon, vocalist of Sponge Cola, during the 2nd MYX Music Awards held last March 15 at the Armed Forces of the Philippines (AFP) Theater in Camp Aguinaldo. MYX, the music channel of ABS-CBN, selected the winners by allowing viewers to vote for their favorite bands and singers through SMS or text messaging.

Through its MYX Magna Award, the music channel paid tribute to the APO Hiking Society but the three legendary singers were unable to attend the awards night because they are currently on tour. An audiovisual presentation was shown to the audience that traced the origin of the group way back in 1973. There were even video clips and old photos of Danny Javier, Jim Paredes, and Buboy Garovillo when they were still starting in the music industry over three decades ago.

"No one really thought they would become professional but it was inevitable that they would become successful," said actor-singer Noel Trinidad, a close friend of the three. Mr. Pure Energy Gary Valenciano described APO as having "transcended time and generations."

Adding comic relief and glamour to the awards night were the presenters of the various categories. Jay of Kamikazee was lucky enough to be paired with Aubrey Miles and he even got to score a kiss! Another couple caught kissing onstage that night was Erik Santos and Rufa Mae Quinto. The starlet gave her boyfriend a congratulatory kiss for winning the Favorite Remake Award for his song "Your Love," which got an overwhelming 71.54% of the votes in that category.

Here is the complete list of winners during the 2nd MYX Music Awards:

Favorite Urban Video: "I Do" by Nina

Favorite Guest Appearance in a Music Video: Chin-Chin Gutierrez for "Pintura" by Kjwan.

Click more photos to view the awardees and the presenters that night.