The Journey Begins for Charice 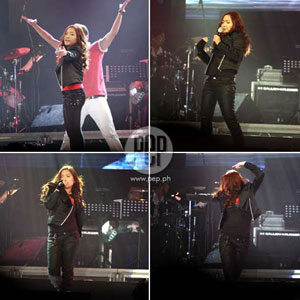 Charice hardly left the stage during her first major concert dubbed as Charice: The Journey Begins held at the SMX Convention Center in Pasay City.

The journey has indeed begun for the little girl with the big voice.


The one-night concert had a five-minute digital countdown before starting at exactly 9:00 in the evening.


The show opened with the band, led by musical director Gino Cruz—playing an instrumental snippet of the Jennifer Holliday song—"And I'm Telling You I'm Not Going," a standard in Charice's repertoire. The multitude of fans eagerly awaited the entrance of "the most talented girl in the world" but it segued into an audio-visual presentation on Charice's humble beginnings. It recalled how she was discovered through the video-sharing site YouTube until she became a world-class recording artist at the tender age of 17.


Charice, wearing a white gown designed by Avel Bacudio, waved to the concert-goers and completed "And I'm Telling You..." with her own powerful rendition. Immediately after her resounding opening number and nearly in tears, the 17-year-old singer thanked her fans for coming to her show, which she really wanted to push through despite her having a cough.


She then sang Celine Dion's number-one hit, "My Heart Will Go On," which, she recalled, was one of the first songs she learned to sing as a young child. Another childhood favorite, "Somewhere Over the Rainbow," was also performed but with a soulfully suave interpretation.


SHOW OF SUPPORT. For the first part of the program, Charice was joined onstage by her Little Big Star batchmates Gian Barbarona, Kyle Balili, Makisig Morales and Rhap Salazar for a medley of singing contest pieces. Their batchmate Sam Concepcion was unable to attend because he was in the United States at that time to perform in the Star Magic World Concert Tour.


After changing into a yellow gown, Charice sang a condensed version of the song that sparked international attention for her: Whitney Houston's 1992 monster smash, "I Will Always Love You." While she was singing, Whitney's personalized message to Charice was put on view for the audience through the video wall onstage. A duet with "the most important woman in my life" followed right after.


She also presented an original composition, "I'll Never Let Go of You," and Beyoncé's "Listen" to the delight of the audience.


As the concert went on, Charice sang "The Prayer" with Asia's Pop Idol, Christian Bautista. The Star in a Million alumnus churned out timeless OPM classics like "Nakapagtataka," the Tagalog-infused "The Way We Were," "You," and his own hit, "So It's You," in a medley he called an "OPM icons concert in one."


TRIBUTE TO THE KING OF POP. The young singer returned onstage wearing a red gown covered with a blazer as dancers from the Halili-Cruz School of Ballet performed an interpretative dance to the tune of another Whitney Houston hit, "I Have Nothing." The Rosa Mystica Choir also joined Charice in performing "You'll Never Walk Alone" and "You Raised Me Up."


As the instrumental adlib of "Just Dance" (courtesy of the band) faded out, Charice wore an all-black glam-rock getup. This time, she showcased her dancing prowess, with help from an all-male group of backup dancers. She dished out Gloria Gaynor's "I Will Survive," Beyoncé's "Halo," Lady Gaga's "Just Dance" one after the other.


One of the highlights of the show was when Charice paid tribute to Michael Jackson who passed away on June 25, just days before her own concert. Still in her black ensemble and with a glove on her right hand, Charice moonwalked on stage to the tune of Jackson's signature song, "Billie Jean."


Charice told the crowd that she was supposed to guest in the King of Pop's This Is It comeback concert series at the O2 arena in London, England scheduled to begin on July 13, 2009.


"Two weeks na lang po, kasama ko na sana siya onstage. Ipe-perform sana namin ‘yung ‘Billie Jean.' Pero, kinuha na siya ni God. Tayo pong lahat ay nagpapasalamat sa kanya and we have all been touched by his dreams," Charice somberly told the crowd, while still catching her breath after her sing-and-dance number. She ended her tribute with another Jackson song, his 1995 #1 hit, "You Are Not Alone," then segued to a video clip of Jackson being embraced by a fan while singing "She's Out Of My Life" in one of his concerts.


After her MJ tribute, Charice, dressed in a black gown with shimmering accents, dished out another medley that further demonstrated the powerhouse belter in her: Whitney's "Try It On My Own," Mariah Carey's "Through The Rain," Celine Dion's "All By Myself," and the Whitney-Mariah collaboration, "When You Believe."


ORIGINAL DIVE MEETS YOUNG DIVA. The young singer announced midway through the concert that Asia's Songbird couldn't attend that night as the latter was down with fever.


At this point, Kuh Ledesma came out to share the stage with the young singer. "Ikinararangal ko na nandito ako ngayon sa first concert ng ating youngest diva... Binibigyan niya po ng pride ang ating bayan... Charice, we love you for everything that you're doing and keep working hard and keep making all of us proud," said Kuh, adding that they practiced their duet, "Anak," at the last minute. She was also impressed at how fast Charice learned the song.


After their duet, Kuh Ledesma sang "What Is Love?" solo before an awestruck audience.


Charice, wearing a blue gown in her fourth change of outfit, then went back center stage and sang a shortened version of another Whitney Houston classic, "One Moment in Time," followed by Etta James' "At Last" (which was also popularized by Beyoncé, as U.S. President Barack Obama's inaugural song), and "Always You" (culled from Charice's Star Records album My Inspiration).

STANDING OVATION. Another highlight came when Charice performed "Note To God," backed by the Rosa Mystica Choir. This earned for her a standing ovation from the audience, and prompted them to ask for more.


Unknown to most Filipinos, Charice's "Note To God" debuted and peaked at #44 on the Billboard Hot 100 music charts early this month after topping the Amazon.com downloads chart and gracing iTunes top 10 songs chart in May. Billboard is the most authoritative and definitive music charts and entertainment publication in the United States.


The concert ended with Charice, already in a pink gown with blazer, singing her words of gratitude to everyone via the OPM classic "Paano Kita Mapasasalamatan?" For her finale, she enjoined her family, friends and fans to sing with her onstage. She admitted that this song really inspired her to reach for dreams when she was still starting with her music career: "Basta't Maghintay Ka Lamang," which was popularized in the early ‘90s by singer Ted Ito.


Save for a few moments of dead air and production glitches understandable for a large-scale concert first-timer, Charice mesmerized spectators with her delightful mix of OPM hits and fast-paced songs during her first major concert.