Young JV promotes Pinoy hip-hop through Ready or Not 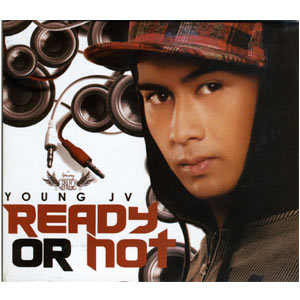 Ready or Not is hip-hop artist Young JV's debut album under PolyEast Records. It contains 15 self-composed tracks that talk about love, friendship, relationships, nationalism, love and peace. The first single "That Girl" is enjoying radio airplay.

New hip-hop artist Young JV is no stranger to fame. At eight years old, he competed in Hong Kong as a member of the SM Ice Hockey Team. In his early teens, he became an endorser of street basketball for athletic apparel company And 1.

But it would only be at sixteen when he would discover his talent in hip-hop and rap music. At a party with his high school classmates, he was swayed to do an impromptu beat. That started it all.

Now at 18, Young JV, or Eduardo JV A. Kapunan III, is all set to penetrate the Philippine music scene with Ready or Not, his debut album under PolyEast Records. The 15-track CD contains the single "That Girl," which is currently enjoying radio airplay.

The young artist from Iloilo admits that it took him awhile to get a recording label to support his sound, because hip-hop music is not the mainstream trend for Pinoy listeners.

But he believes the popularity of American hip-hop artists such as Akon and Jay-Z can encourage local listeners to patronize his sound.

DEBUT ALBUM. Young JV originally planned to release an album titled Doin' It Big, but it was shelved because the producers felt it sounded "too hip-hop" and wouldn't sell. Thus, the artist relied on his individuality and recorded a new album with a more "commercial" feel.

The result was Ready or Not, an album that contains ear-friendly rap and R&B tunes. The themes of the song, composed by Young JV himself, vary—there's partying, barkadahan, love, nationalism and friendship.

Most of the songs in Ready or Not have upbeat, club-party tempos like "Can't Get Enough," "Do the Snap," "Outro," "Kaibigan Lang" and"Lipad Noypi."

But Young JV also wrote a song calling for peace in Mindanao, titled "Kapayapaan." As a son of a retired Air Force officer who fought battles in Mindanao, Young JV wants to promote peace through his music.

The hip-hop artist also wants to donate part of the proceeds of the sales of his album to the orphans of soldiers killed in the in the region, through his own foundation.

"Ako, I'm all about lang peace and love, that's my advocacy for the people. Gusto ko may purpose ako for my music," Young JV ended.