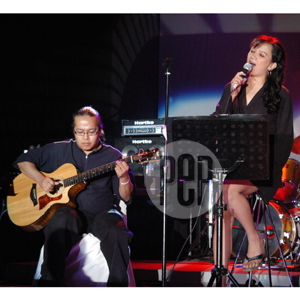 Cooky Chua and Mike Villegas performed the original song "Upside Down" as well as "Runaway" by the Corrs last February 28, during the public launch of this website—the Philippine Entertainment Portal. PEP is the online home of YES! Magazine.

It had all the glitz and glamour of a major film awards night, without the notoriously long lulls of a "live" telecast (which make those shows a true chore to behold), and much better food—it was YES! Magazine's 7th Anniversary Party, held last February 28 at the NBC Tent, Global City, Taguig. Cooky Chua and I were given the honor of being the first musical performance of the night.

Now, I'm used to playing the classy clubs and the occasional ultra hip party. But little did I know it was going to be a veritable who's who of local show business! Ma'am Jo-Ann [Maglipon, editor-in-chief of YES! Magazine and PEP] even had a diagram of table guests—who to sit where and who not next to! It reminded me of that scene in the movie In The Line Of Fire where Clint Eastwood kept a similar piece of paper, looking frantically for the President's assailant. Oh, but on to the music stuff!

Juan Pablo Dream is one of my favorite local bands, with their brand of ‘60s influenced dance pop. I saw them play last at designer/pianist Kate Torralba's birthday bash a few weeks ago, and they ROCKED! Sadly, their stickman Weslu—in this writer's estimation, the country's best ska drummer—passed away on a motorbike mishap weeks prior to the YES! anniversary.

Weslu was in Put3Ska during their heyday, and his grooves never failed to drive me to the dance floor when they toured with my group, Rizal Underground. But I'm sure the man was all smiles up in Heaven, looking down on an awesome performance by his still earthbound bandmates. Juan Pablo Dream has one of the steadiest rhythm sections around, and singer Bing was a psychedelia-clad Pinoy version of the Godfather of Soul!

Several times during the evening, I'd do a double take on the NBC Tent's big screen TV and stare dumbstruck at Bing's profile—I could swear James Brown was with us from the hereafter!

Now, their penchant for ‘60s songs wasn't lost on Ms. Jo-Ann either, as she and her incredible staff (keep those checks comin' guys!) had the awesome idea of putting their setlist on menu-like lists and offering them up as sing-along songs for anyone in a karaoke state of mind. Only instead of the static and lifeless accompaniment you would get at home, you had a live band—one of the best in the business—playing for you! How cool was that? Cool enough to entice Tirso Cruz III onstage to belt a stirring version of "My Girl!"

Now, I'm as knowledgeable about current showbiz popstars as I am of Advanced Rocketry, but who doesn't know Pip?!!! And to see him crooning with the grooving made my night! (That and the lechon, but that's a whole other blog...)

Next up? The Boyfriends! Yes, those headliners from yesteryear never seem to have left, and their brand of vocal harmony still rings true through the ears of every Pinoy generation. Ang sarap pakinggan ng mga kanta! In this age of computerized recording and auto-tuned vocals, it was so refreshing to hear old-school vocalizing done perfectly—and with every singer playing an instrument! An extra bonus was the keyboardist as cameo from another Pinoy band legend, Abracadabra. I only knew about it when it was pointed out to me by Juan Pablo's singer from offstage, and it was a thrill hearing the pillars of Pinoy rock shaking the Tent's scaffolding with sheer volume!

All in all, it was a night of great music peppered with stars, and it was an honor to be a part of it! Yes, indeed! Yes! Yes, indeed!