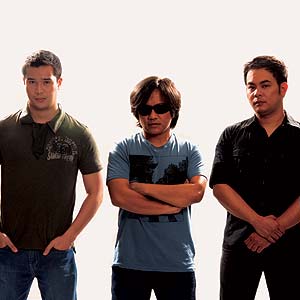 The realization that Sugarfree has been actively around for ten years already still renders frontman and chief lyricist Ebe Dancel in total disbelief.

As a struggling band dreaming to be heard back then in the local rock n' roll stage, Sugarfree was on the verge of calling it quits. After a couple of hits and misses, mainstream success finally caught up with the release of their debut album, Sa Wakas (2003). Sugarfree followed up Sa Wakas with platinum sellers Dramachine (2004) and Tala-Arawan (2006).

CELEBRATING A MILESTONE. Fast forward to 2009, the band will now mark its tenth year in the music industry. Frontman Ebe, drummer Kaka Quisumbing (who joined the band in 2006 to replace longtime drummer, Mitch Singson) and bassist Jal Taguibao are buckling down to celebrate Sugarfree's decade-long existence with a new album and two-night special concert.

"Hindi lahat ng banda umaabot ng ten years," Ebe told PEP (Philippine Entertainment Portal) over a glass of red iced tea in a recent interview. "We feel very blessed. It's been a great ride so far and I'm looking forward to the next few years."

The idea to stage an anniversary concert stemmed from the three-piece unit's desire to share the special occasion to all the fans and loyal listeners who patiently stuck with the band through thick and thin.

The concept of incorporating live string arrangement into the band's music is not entirely new. Sugarfree, together with the MSO, collaborated two years ago in a concert held at the Music Museum. EMI Philippines (now PolyEast Records) released the record as a live two-disc album in 2008.

Ebe shared in recollection: "It was a very overwhelming experience for us. I think 'yong hangover ko sa concert na yon lasted for a few months. Every song we played that night parang may magic na nangyayari na hindi mo maipaliwanag.

"I mean what better way to celebrate ten years than do something which you've done successfully two years ago."

But one can expect a much better show as compared to its predecessor owing of course to the reason behind the spectacle. For one, the band's new manager Karin Araneta tapped a new production team to complement the band and the orchestra unit led by Silent Sanctuary's Chino David.

More importantly, Sugarfree will make the show at least a bit different from the one they previously did as what Ebe explained: "Siyempre the dynamics of the band has changed since two years ago so I think everything will come out naturally when it comes to the changes that we will incorporate in this one."