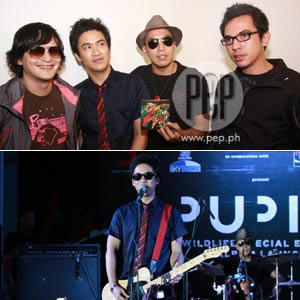 Pupil—composed of (top frame, from left) Yan Yuzon, Ely Buendia, Wendell Garcia and Dok Sergio—thrilled their fans as they rocked the SkyDome of SM North Edsa for the album launch of Wildlife Special Edition.

The band is composed of Ely Buendia as frontman and guitars, Yan Yuzon on lead guitar, Dok Sergio on bass and Wendell Garcia on drums. This Sony Music recording artist is co-managed by Day Cabuhat, who used to handle the Eraserheads, and Diane Ventura, the mother of Ely's second child Eon.

Fans of Pupil didn't mind waiting for the band as rain poured heavily outside the venue. To keep them entertained, The Dorques performed for the crowd. This indie band—composed of Joff on frontman and guitars, Nina on keyboard, Aimee on drums, and Arnel on bass—is inspired by Japanese melodies and a retro vibe.

The Dorques performed songs such as "Waltzing Away," "Murasaki Blue," "Le Metronome," "Sun," and "Supercool." Instead of singing "F*ck to Dance," the band changed the lyrics of to say "floor to dance" in consideration for the minors present at the event.

At around 9 pm, fans shouted their lungs out as Wendell, Dok, Yan, and Ely came onstage. The host teased the crowd to come closer to the stage. The fans quickly surrounded the stage and brought out their gadgets to record the band's performance.

Pupil started their set with "Disconnection Notice" from their second album under Sony BMG, Wildlife. After making the audience members giddy with excitement over their fast song, the mood mellowed with "Here I Go Again," also from the same album.

Then Ely began singing "Matador," a song that was created along with "Set Me Apart." Both songs were submitted to Sony Pictures Entertainment as demos for the Animax theme song. However, Sony chose "Set Me Apart" for Animax.

After Dok's turn, Ely performed "Gamu-Gamo," "Different Worlds," "All This Time," and "Animal Lover." The first three songs are from their debut album Beautiful Machines, while "Animal Lover" is from the second album, Wildlife.

Their last number was supposed to be Yani Yuzon's rendition of "Talon," but the audience kept asking for more. Drummer Wendell Ramos granted the fans' wishes as he gave his own rendition of the late Michael Jackson's "Man in the Mirror." Both he and Ely crossed their legs and sat down on the stage. Ely played his acoustic guitar, much to the delight of the audience, composed mostly of students.

The crowd asked for one more song so the band obliged by singing Pupil's multi-awarded song back in 2006, "Nasaan Ka?"

Those who bought the Wildlife Special Edition copies that night were able to participate in a raffle for the chance to win a life-sized standee of the band members. Ely, Yani, Dok, and Wendell gamely posed with the winners who were able to take home the huge souvenir.

As the night ended, fans lined up to have their albums signed by the Pupil band members.


WHY RE-LAUNCH? Backstage, PEP (Philippine Entertainment Portal) had a chance to interview Pupil about their album.

Why did they choose to re-record and release Wildlife Special Edition instead of coming up with a new album?

"Because ang daming istorya na nangyari sa Wildlife [Pupil's second album] na parang we didn't want all of that to put to waste," Yani explained. "It really needed a separate disc that contains the memories. We really wanted to chronicle this time in our lives, in the life of this band, and our individual lives."

How does it feel that the band is in its fourth year already?

Yani spoke up for the band when he said, "Basta kung ano man, we'll just keep continuing, and we hope to spend more years like tonight. We hope to be an agent for the progress of Philippine music, and the Philippines in general, because we are lagging behind with the rest of the world, and that shit has to stop," he said.

What are their inspirations for the album? The band members quipped that they get inspiration from a lot of things, be it animals, plants, music, girls, arts, books, and other literature.

Are they open to endorsing candidates for the 2010 elections?

"We would only do this for the candidate we believe in because alam mo yun, it's also our responsibility. Tinitingala din kami ng mga tao, and I'm sure we want to be responsible with the choice of whoever we want to endorse, if we choose to endorse," Yani pointed out.

But for now, fans of the band can now avail of the Wildlife Special Edition album available in record bars nationwide. This two-disc album has been digitally remastered and includes live performances from the Listers Night Party , music videos, demos, and even wallpapers of the band.