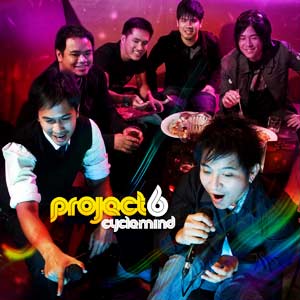 The 12-track album Project 6cyclemind is now available in CDs under Sony Music.

How does it feel to have one's self-penned songs previously recorded—and popularized—by other artists, and offer them anew to the discriminating ears of the music-loving Pinoy public? The band 6cyclemind has the answer.


And why would they? With the members' impressive songwriting skills, other artists even wanted and asked the them to write songs for their albums, aside from writing songs for their own albums. Likewise, 6cyclemind also interpreted their own versions of hits in some compilations, such as "Prinsesa," "Upside Down" and "Dinamayan."


"Most of the songs in Project 6cyclemind are those that we came up with and gave to other artists. This time, we did our own versions and combined them in one album," said Ney. Chuck added: "Some songs were made and were recorded very early and we think that now is the perfect timing for them to be heard."


The latest release coincides with the band's eight anniversary in the music industry. The band's last outing was 2007's Fiesta! Magsasaya ang Lahat, which churned out the hits "Aaminin" and "Saludo."


When asked how different the Project 6cyclemind compared to their previous albums, the band unanimously described it as "videoke-friendly."


"I think it is more pop-oriented, more commercial, in terms of arrangement from the originals to covers," Rye said.


No heavy rock ditties this time?


Project 6cyclemind is bannered by the carrier single "Walang Iwanan" which they did in 2005 for an artist called Popfilter. The song also reflects who they are as a band.


"We have been through challenges, the happy times and the tough ones, but whatever happens, we are still together and will continue to be... Literally like the song ‘Walang iwanan sa amin,'" Ney said.


6cyclemind has achieved a lot since they were formed in 2001 and became recording artists with their debut album, 2003's Permission To Shine.


Then up and coming artists (and now popular bands) approached them for some help and they readily obliged. Callalily's debut release in 2006 included 6cyclemind compositions "Dream" and "Takpisilim." Moonstar 88 will be remembered for one of their hits "Sa Langit," again, courtesy of the band. The same goes for solo artists Danita, with her singles "If Only" and "Kung Wala Ka Na," and Pinoy Dream Academy Season 1 finalist Chad Peralta for "Kasalanan."


The band's songwriting specialty also took their music to the television series route via "Mahiwagang Pag-Ibig," interpreted by Pinoy Big Brother Teen Edition alumnus Aldred Gatchalian for the ABS-CBN afternoon series Love Spell, and "Pangarap," a hit by Karel Marquez which was also used in a Koreanovela.


One of today's most in-demand bands that they are, 6cyclemind was included in The Eraserheads tribute album Ultraelectromagneticjam, where they recorded their own version of "Alapaap," as well as in the Hopia, Mani, Popcorn compilation where they cut the Sampaguita track "Bonggahan." Likewise, the band took time to offer social aid via "Sagot Kita," a song they recorded for the ABS-CBN Foundation. Of course, who can forget the popular Tanduay jingle "Noon at Ngayon"?


These songs (save for "Bonggahan") are all included in the 12-track Project 6cyclemind. Other numbers include collaborations with critically-acclaimed rap artist Gloc 9 and Wendell Garcia of the band Pupil ("Kasalanan"), and with Maestro Ryan Cayabyab ("Takipsilim").


Project 6cyclemind is available in CDs under Sony Music.