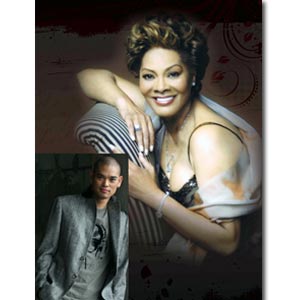 Dionne Warwick will hold her one-night only concert titled A Memorable Evening with Dionne at the Araneta Coliseum on October 2, 2009. Her special guest will be Prince of R&B Jay-R (inset).

Imagine one of the world's most enduring female R&B superstars sharing centerstage with Manila's Crown Prince of R&B. It's bound to be a nostalgic night of pure heart and soul that serves as a fitting backdrop for the meeting of generations onstage and in the audience.

H21 Events and SEMAX International Philippines Inc., in cooperation with ALV Events International, proudly present Dionne Warwick in A Memorable Evening with Dionne at the Araneta Coliseum on October 2, 2009, with Prince of R&B Jay-R as special guest.

Over an illustrious four-decade career, Dionne Warwick has established herself as an international musical legend. From the sixties to the early seventies, she gained renown for her collaboration with equally-legendary songwriters Burt Bacharach and Hal David. She popularized timeless classics such as 'Say A Little Prayer,' ‘Don't Make Me Over,' ‘Do You Know the Way to San Jose?,' ‘Alfie,' ‘Walk on By,' ‘A House is Not a Home,' ‘Promises, Promises,' ‘I'll Never Fall in Love Again,' ‘This Girl's In Love With You,' ‘Reach Out For Me,' ‘Make It Easy On Yourself,' ‘Always Something There To Remind Me,' ‘You'll Never Get to Heaven (If You Break My Heart)' and many more.

From that era onward, the multi-awarded Grammy winner also turned out such memorable hits as I'll Never Love This Way Again, Déjà Vu, and joined longtime friends Gladys Knight, Stevie Wonder and Elton John to record the classic That's What Friends Are For.

She also lent her voice to the popular 1985 global anthem, We Are The World, alongside Michael Jackson, Lionel Richie, Tina Turner, Diana Ross and many others.

For his part, Prince of R&B Jay-R rose to prominence in 2003 after the release of his debut album, Gameface. The Fil-Am composer/arranger soon followed that up with equally-successful works including an eponymous release, the holiday tribute CD Christmas Away from Home, the runaway best-seller Soul In Love and the recently-released Holiday of Love. The multi-awarded crooner has also proven his mettle as a competent actor, TV host and commercial endorser.