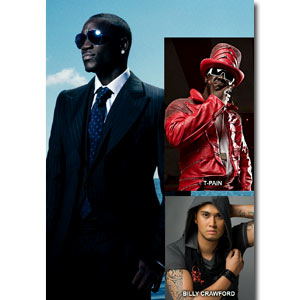 Akon's concert in the Philippines titled Freedom Tour '09 will finally push through on October 23, 2009 at the Araneta Coliseum. He will be joined by hip-hop artist T-Pain (upper right frame) and Billy Crawford.

Filipinos will soon be able to watch three of the world's biggest names in rap, hip-hop and R&B as they share one stage in the Philippines.

It's thrice the thrill, energy and excitement; an unstoppable showdown of electrifying moves and grooves as unleashed by our very own Billy Crawford, platinum hip-hop artist T-Pain, and the prolific American-Senegalese singer/songwriter and record producer Akon.

For the very first time, this phenomenal musical triumvirate takes Manila by storm via the much-awaited Freedom Tour '09, to be held on October 23, 2009 at the Araneta Coliseum.

Akon, whose proverbial rags-to-riches story turned him into a full-blown multi-media phenomenon, is known for such hits as "Right Now (Na Na Na)," "Beautiful," "So Paid," "Home Grown," "I Wanna Love You," "Smack That," "Sorry, Blame It On Me," and "Don't Matter."

The five-time Grammy nominee's life story has also become one of the most inspirational sagas in recent memory, turning his life around after a troubled youth by pursuing a career in music, notching millions in album sales since the released of his debut album titled Trouble.

Grammy winner T-Pain caught Akon's attention when he came out with his reworked version of the latter's "Locked Up" in 2002. Seeing his potential, Akon promptly signed him up to his newly-formed Konvict Music label. Since then, T-Pain garnered acclaim for such hits as "I'm Sprung," "Buy U A Drank," "Bartender," "Can't Believe It," "Chopped & Skrewed," "Freeze," "Low," "Got Money," "Good Life," "Kiss, Kiss" and many more.