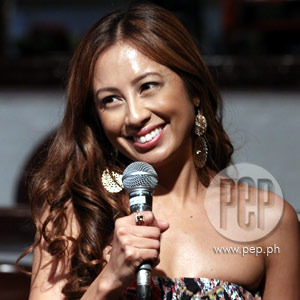 As a child, Stephanie Reese had already performed with other choir members at Carnegie Hall in New York. By November 7, she will be topbilling her solo concert in the venue and the proceeds will go to the Gawad Kalinga Foundation for the homeless, the Philippine equivalent of Habitat for Humanity.

Filipino-American thespian and Carnegie Hall-bound singer Stephanie Reese admits to serving a higher purpose in life. She says that there is more to life than singing and acting.

The US-based diva, who has earned the moniker "Standing Ovation Queen" due to her stellar performances here and abroad, has chosen to donate the proceeds from her November 7 concert in New York to Gawad Kalinga. Reese is the third Filipina to perform in the famed concert venue after Asia's Songbird Regine Velasquez in 1991 and internationally-acclaimed theater actress Lea Salonga in 2005.

"You can't just be a singer or an actress. You can't just be pretty and young. You have to a have a higher purpose for why you are here on this Earth," says the multi-faceted artist in a press conference held yesterday, September 17. The singer, songwriter, stage actress and director has been helping the organization for four and a half years now.

"That was my introduction to the Philippines," she shares, narrating how GK invited her to come to the Philippines—a move that allowed her to discover her roots. The singer admits she is indebted to GK, an organization advocating for a slum-free, squatter-free nation. According to the Los-Angeles based singer, that was her "first experience of any Third World poverty" and described the feeling as "overwhelming."

She continues, "I'm so proud and happy [with my involvement in Gawad Kalinga], because if I allowed myself to have a career based on my own desires, I don't think I can be happy. But knowing that I have a higher purpose, that I want some kind of legacy, not just in music, [but in helping charitable causes] through my art is something that I feel so grateful for."

Her philanthropic endeavors started in the U.S., through a group called Rise N' Shine (a camp for children stricken with HIV and AIDS), where she taught acting to the kids. From then onwards, Reese started volunteering in children's hospitals, retirement homes, and nursing homes.

Eventually, she took it upon herself to use her talent to hold benefit shows for various causes. At present, the singer has staged benefit shows for a number of charitable institutions including international groups The American Red Cross and Make A Wish Foundation, among others; and she has also helped out in relief efforts for the victims of Hurricane Katrina.

Locally, she has offered her talents for Bantay Bata 163, and also aided in the funding of the Leyte Mudslide victims.

Because of her charitable works, the singer-philanthropist has been awarded with certificates of gratitude from many public officials in the U.S., as well as from a number of consulates and departments in the Philippines.

REALIZING THE DREAM. Reese was able to clinch a spot in the royal Carnegie Hall because of a certain producer, she recalls. After doing a show in a Philippine consulate in New York City, the singer says that the producer expressed a desire to hold a show in Carnegie Hall, processed the necessary requirements, and soon after announced to Reese that she is to become the first Filipino-American to hold a solo concert in the concert stage. "I was thrilled," she exclaims.

To be able to hold a solo concert in Carnegie Hall is a dream come true, says Reese, who has performed in the said concert arena as a child in a girls' choir. She narrates that during her stay in a predominantly Caucasian choir, she was the only one with a different ethnicity.

"I remember being on that Carnegie Hall stage and just dream so much," she recalls. She explains that as a Filipina living in the States, it was no easy task to attain a dream like that because "you know you're different."

Now that her dream is finally realized, she tells the press, "I I hope that we can send a message that anything is possible...that the dreams that you have as a child are all possible. And I hope that this launches many [other Fil-Am artists] who can also make it there."

But before she graces the famed venue in New York, Reese will be restaging of her concert titled I Am Stephanie Reese, to be held at the Music Museum on October 2.

"The Pre-Carnegie concert at the Music Museum will feature around 50 percent of my act in New York. I'm performing a diverse selection of songs that reflects my exposure to music from around the world. I'd be honored to share this evening with you," says the singer in a press release sent by STAGES, her management outfit.

And now Filipinos wonder, what use of being a Filipina if Stephanie Reese isn't going to sing homegrown songs?

To this she replies, "I will be [singing] OPM in the concert," she reveals, stating that she learned all the older OPM songs from her "titos and titas in Seattle." She also narrates that her pianist encouraged her to sing OPM, which she will happily include in her concert and album.

MUSICAL ROOTS. The U.S.-based talent has shown a passion for singing, since she was around four years old, she recalls in an interview held after the press conference. According to Reese, "neither of [her] parents are singers, but they do have a love of music." Her grandparents from her Filipino side loved music, as well, and "always had music playing in the house." The singer added, "My lola used to sing to me everyday."

Even though her parents didn't possess the kind of talent she has in her arsenal, Reese says that her sister exhibits the same degree of passion.

"My little sister is a songwriter and performer also," she answers. "She does R&B and hiphop, and writes music for film and television including Gossip Girl, for an Eva Longoria movie, for a Gatorade commercial, for the Superbowls... She helps me write sometimes," she says of her sister.

PEP (Philippine Entertainment Portal) asks Stephanie where she gets her inspiration, considering that she has honed several talents including operatic singing, songwriting, acting and directing for stage.

She answers, "My love for performing, and [because] I wasn't good at anything else," she laughs, after recalling how friends used to tease her for venturing into other fields. "This has always been my passion since I was a little kid, and I'm just so happy I can live this dream. And the more inventive I become," she says, "I added more things to my list, like director or writer, whatever, because there's so many ways to be creative in the arts."

The singer—whose art form, according to STAGES President Audie Gemora, borders on cabaret a la Liza Minelli—idolizes another well-known singer, Lea Salonga, whose beginnings are also firmly rooted in theater. In previous years, Reese has played the role of Kim in a German production of Miss Saigon, the same role that Lea Salonga portrayed in 1989.

PEP asks the singer about her feelings on being able to follow in her idol's footsteps, as a performer in Carnegie Hall. She exclaims, "Oh gosh! I feel like it's an honor and a blessing," she says, "[because] I used to sleep with the Miss Saigon album under my pillow. And I had Miss Saigon t-shirts, everything, and just to do anything that's she's done, is really like an honor. She paved the way for all of this."

Reese also shares that she has sung with Martin Nievera and Lani Misalucha in the States, both of whom she likes as performers.

HOPING FOR A CAREER IN THE PHILIPPINES. Stephanie Reese has not only toured Asia and the States, she has also performed alongside famous international singers Patti Labelle and Natalie Cole, and has a flourishing career in the States. With these feats in her growing list of international achievements, it is quite a surprise how the U.S.-based singer still plans to launch a career in the Philippines, stating it is her "dream."

Members of the press were amazed by her comment, for whereas most local singers can only dream of the magnitude of success she has achieved abroad, the international singer still wants to go back to the Philippines and start afresh.

"I'm very blessed with an international career, but when you're a Filipino-American, you're longing for your roots so much. I've found my roots here, and I've found a higher purpose for my singing here in the Philippines," she explains.

She adds that it is important for her to be known in the Philippines because of the kind of work that she wants to do. "We're still a Third World nation," she says, citing her talent as one of the means by which she could try to create a change. "Through my work as an artist, I want to bring light to the poverty here and in the States. And I know the bigger my name becomes here in the Philippines, I can create bigger changes."

Stephanie Reese will be staying in the Philippines until the 5th of October, three days after her Philippine concert. She will then be flying to New York to prepare for her Carnegie Hall debut, which will be held on November 7, 2009.