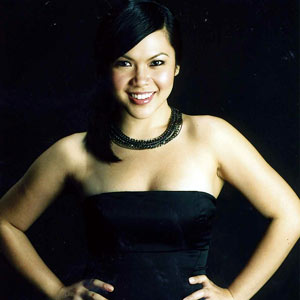 The wait is all worth it for ex-Philippine Idol aspirant, Apple Chiu.

Three years after she was booted out from the local franchise of the highly popular American reality-based singing competition, Apple finally proved her achievement was no fluke with the release of her eponymous debut album distributed by Polyeast Records.

It was of course a long uphill climb for the 25-year-old Caviteña who brandished her vocal pipes in Philippine Idol with her memorable rendition of Patti Austin's "Rhythm of the Night," and Aretha Franklin's "Natural Woman." Despite her impressive performance of "Lady Marmalade," Apple placed seventh overall to eventual winner, Mau Marcelo.

Undeterred, Apple auditioned for ABS-CBN's karaoke game show, The Singing Bee, and was admitted as a member of The Songbees apart from doing corporate gigs and bar shows.

Contrary to what the critics are saying based purely on the gap of her Philippine Idol stint to the launch of her first album, Apple personally feels that the launch came perfectly at the right time.

SINGING MALE BALLADS. An interior designer on the side, Apple's debut record contains ten tracks—majority of them classic OPM ballads popularized by some of her favorite Pinoy male singers.

"I grew up listening music from jazz standards to R&B to classical and even rock," she said in the accompanying press kit. "A real artist is open to all genres and versatility, a key to going beyond on what you can do and what you can offer to other people."