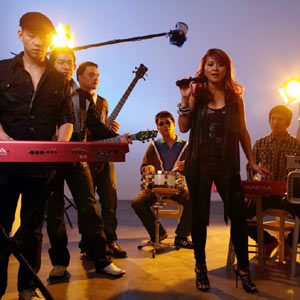 Playlist, the 14-track studio album of Freestyle, is now availble in record bars.

Freestyle's existence was first felt during the late '90s, the time when local music was almost entirely about bands and singing groups. Since then, there was no stopping Freestyle. From the release of their very first single until today, the band has continuously come up with songs that have reached hit status and have become anthems of love and pain.

The band takes pride in several multi-awarded studio and live albums, of which chart-topping singles were released. This simply proves Freestyle's absolute success in the recording scene. And alongside such success, the band never abandoned what they do best: performing live, as attested by numerous local and international concerts and sought after gigs.

At present, Freestyle is very much in the music circuit with a brand new album released under Viva Records.

Aptly titled Playlist, Freestyle goes back to the basics in this new studio album filled with romantic and easy-listening covers that people clamor for especially during live gigs. Listeners are in for a genuine musical treat with the band's own heartfelt rendition of fourteen popular love songs, reflecting a passionate flair that is clearly Freestyle's.

Songs in Playlist include I Will Survive, There's No Easy Way, Got To Be There, Suddenly, Take Me I'll Follow, I Live For Your Love, Don't Let Me Be Lonely Tonight, Sara, Love's Holiday, Til I Loved You, Sweet Baby, Easy, Truly, and the carrier single I Can't Find The Words To Say Goodbye.

Freestyle is fronted by a powerhouse trio who enter into a perfect harmony every time they sing together: Jinky Vidal, Joshua Desiderio and Mike Luis. And because each one also has his own strong and yet distinct vocals, exciting variety and versatility are echoed in the band's music.