Jericho Rosales's songs for past girlfriends included in his new album 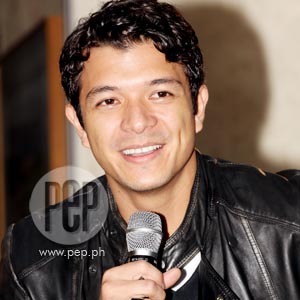 "A lot of guys can dedicate this song [to their loved ones]. Let this be a gift to the listeners," said Jericho Rosales about the song "I Love Your Way." He wrote this song as a birthday gift for his ex-girlfriend Heart Evangelista when they were still together. "I Love Your Way" is included in Jericho's 10-track album Change.

Although he was not successful in his previous attempts to make a big name in the music industry, Jericho Rosales has not lost the desire to share his music to the public.

Change, according to Jericho or popularly known as Echo, actually represents the changes that happened in his life after releasing an album with his then band called Jeans.

Coming from a music band, Echo said that he's still not used to promoting the album without his band at his side.

He then related how affected he was when the group disbanded to pursue their personal plans.

Echo described, "Honestly, this is one of the tragedies na dinaanan ko sa buhay ko. I would say that because when my band had to go away, it broke my heart talaga. They had to earn money and I had to go back to acting and hindi ko na mabigyan ng time 'yong music. We had to part ways kasi kailangan namin kumita ng pera. You know, I lived the life of medyo normal lang ng konti. I mean, normal sa showbiz level. I had to stop for a year and earn money from singing every night sa mga bar."

Although earning money in his chosen music career was not as easy as he was an actor, Echo said that he would still treasure the experience.

He said, "Ako, hindi talaga ako nagsisi doon because I learned a lot being on stage. Whether there's five people watching me or five thousand people watching me, I'll be able to perform kasi 'yong training na inabot, e. There were times talaga na I wanted to cry, I wanted to quit. I was in front of mga foreigners and konti lang ang nakikinig sa akin. Hindi ko alam na mga foreigners ang makikinig sa akin, e, mga Tagalog songs ang dala ko. I only have a few English songs."

Right now, Echo and his former bandmates are currently holding an audition for potential bandmates but he's not yet sure if he will release an album in the future.

SONGS FOR HIS PAST GIRLFRIENDS. During the press launch, Echo mentioned songs included in the album that are dedicated to his past girlfriends: Kristine Hermosa and Heart Evangelista.

First, he talked about "Pusong Ligaw" for his onscreen partner and former girlfriend Kristine Hermosa. Echo said he wrote the song because, "‘Pusong Ligaw' kasi noong nagbalik-tambalan kami ni Kristine for the soap. They asked me if I can write one song na para sa soap. This particular song, medyo lumang kanta ko na ito na sinulat ko at nire-write ko. I believe they're gonna use this song para sa soap namin [Dahil May Isang Ikaw]."


Echo plays the fiance of Kristine Hermosa in the ABS-CBN teleserye Dahil May Isang Ikaw.

He became quiet when the song "I Love You Way" was played in the room. It turned out, this song was his original composition dedicated to his most recent ex-girlfriend Heart Evangelista.

"This is the song where sinulat ko ng impromptu and kinanta ko ng live sa birthday niya," he started describing. "It was her birthday couple of years ago. The best thing that I could give her was words, di ba? Words talaga and I like writing so on the spot, nag-birthday party siya sa isang cinema. Then, tinawag ko si Dan [Serano], gitarista namin and we sang it there."

The actor-performer said that he did not hesitate to include it in his album because, "I'm not ashamed of my past."

He continued, "I'm not ashamed of anything about myself. I know that lahat ng ginagawa ko, whether it ended well or not, I believe that there's a purpose to everything."

Check out these songs and other revivals, which Echo personally picked for his album Change.

By December, the singer-actor will have a major concert in connection with his music album. It was first scheduled on December 5, but when the actor found out that Kaya Natin 'To concert would also be on the same day, Echo said that he might have it moved to a different day. He added that the concert would also be a benefit concert for Filipinos greatly affected by typhoons.

Lost Without Your Love

And I Love Her

Beautiful In My Eyes