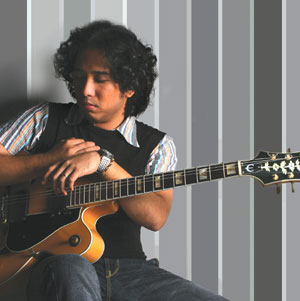 Jerome Rico: Album shows his guitar wizardry.
Jerome Rico joins the league of Warner Music Philippines' roster of artists via his debut album, Guitar Shop, which carries 18 well-chosen tracks of local and international hits from the ‘80s to the present.

The lead single of the album is a remake of an Astrud Gilberto classic hit, "Agua de Beber," featuring Bossa Nova queen Sitti on backup vocals and finger snaps. Jerome Rico further plucks away the strings of your heart with his rendition of recent laid back hits that include: "Moonlight Over Paris," "The Way You Look At Me," "Love Moves in Mysterious Ways."

The entire album is a showcase of Jerome's guitar wizardry.

Born in Bataan, Jerome felt the inclination in guitar playing at the age of 16 when he started to listen to standard songs and collect the works of his favorite jazz artists. His musical talent intensified when he enrolled in classical guitar at the University of the Philippines. In between studies, he fulfilled special gigs with Kyla, Paolo Santos, Nyoy Volante, and Nina. Slowly, he gained exposure in the live circuit as he pursued his dream to become a noted guitar player.

What is marvelous about Jerome's talent is that he's one of the few guitarists who don't use a pick despite his intricate repertoire. Guitar playing is something hard for Jerome to give up.

"It gives me satisfaction when I strum my guitar. I find serenity in the sound of my guitar. It's something I love to do and will be doing all my life," says Jerome.

And despite the uncertainties in the music biz, Jerome can't imagine himself not strumming his guitar.

Jerome Rico is just a step away from music stardom with the release of his debut album, Guitar Shop, which fuses standard classics with his innovative style.