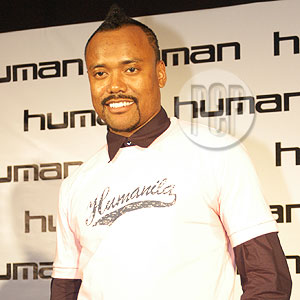 Apl.de.Ap of Black Eyed Peas admits that he is still being influenced by Filipino artists that he has grown up with. He also reveals that he grew up listening most of the time to the music of Asin.

Apl.de.Ap—Allan Pineda Lindo in real life—is considered the first Filipino to win a Grammy Award for being a member of the Black Eyed Peas. The hip-hop group won three Grammy awards for the rap category in the years 2005, 2006, and 2007. Now, he wants to share his blessings to fellow Filipinos who have a talent in music.

In an exclusive press conference for Apl.de.Ap held recently, media people were able to know more about Apl's life, how he got in the U.S. and what were his influences in making music.

Home at last. This 32-year-old hip-hop artist, a native of Pampanga, migrated to Los Angeles, California, when an American family adopted him. Allan admitted that there were a lot of things that he missed while he was in the U.S.

He said the most memorable thing for him about being a Filipino was actually growing up in the Philippines. "The best thing is growing up here in the Philippines and experiencing the life here. When I got to America, you know, I got all that humbleness [sic] and the determination to make it. Filipino people are hard-working, I think that's what I brought when I got to America."

Of course, like other Filipinos abroad, Allan also missed eating authentic Filipino dishes. He said excitedly, "The foods, of course, I didn't get to eat a lot of chicken adobo and halo-halo and stuff like that, fishballs. That's what I miss."

Most of all, aside from the material things, Allan misses his family. He said that the family orientation here in the Philippines is different from that in the United States.

Although he never failed to communicate with his relatives here, being with them personally is far more different. Maybe this was the reason why he brought his mom to America last year. He plans to bring his siblings to the U.S. this year.

"I just finished petitioning my mom. My mom is in America now. And now I'm working with my siblings, my brothers and sisters, I'm working on their papers," said Allan.

Filipino style. Although he was still young when he left the country, Allan believed that he never forgot his roots, especially those that have influenced him.

In fact, in the song called "The Apl Song," which is one of the cuts in Black Eyed Peas's 2003 album Elephunk, it was obvious that the rapper was actually influenced by the '70s group called Asin. The full chorus of this song was taken from Asin's song "Balita."

Apl said, "My inspiration to music is, of course, Asin. I grew up listening to Asin, Stevie Wonder, Bob Marley."

Another song that clearly shows where Apl's pride in his homeland is the all-Tagalog song entitled "Bebot," which is from BEP's 2005 album Monkey Business. In this song he showed how much he prefers Filipinas over other nationalities.

However, when this song came out it drew some negative reactions. Some detractors said that Apl portrayed Filipinas badly in his song. But Apl defends this by saying, "Some people thought that I represented the Filipino girl in the wrong way but, you know, that wasn't my intention. That's what I experienced growing up in America, being around with Filipinos. It wasn't like a sleazy or disrespect to Filipina girls, I was just showing their beauty."

What's up with Apl? Like Fergie, the only lady member of the Black Eyed Peas, Allan is also currently doing a solo album.

In the said album, Allan did not forget to include Filipino artists. "I've actually collaborated with Lolita [Carbon] from Asin again. Now, I'm looking [forward] to working with other Filipino artists like Artstrong [Clarion], I don't know, guys, if you know him. I will collaborate with him," said Allan.

He added, "I got more Tagalog songs in it and I'll be collaborating with more Filipino artists. I'm gonna collaborate with Mary J. Blige, John Legend, and the rest of the Black Eyed Peas."

Aside from endorsing Human clothing line, Apl also came back to the Philippines recently to introduce his own record label named Jeepney Music Inc., which is based in California, USA. Apl.de.Ap aims to discover aspiring Filipino talents through Jeepney Music, especially those who are in the United States.

"It's the search engine to look for under Filipino artists. Right now, I got two artists on my label [Replay and Rocky Rock]," said Apl.

He has also partnered with ABS-CBN to help him search for other Filipino artists. For those who want to apply in Jeepney Music, Apl said they can just give them a a demo of their work to Jeepney Music at MySpace .

Apl also revealed that the Black Eyed Peas will have a tour again and they might stop by in the Philippines for another concert.

With all the opportunities that Allan is experiencing now, it seems like he does not regret leaving his country behind for a while. And if Apl could give a message to the 14-year-old Allan Pineda, it will be: "Everything is all right, you know? Don't be scared to make that decision, leaving your family, because if you work hard and stay focused you will be able to go back for them and help your family."