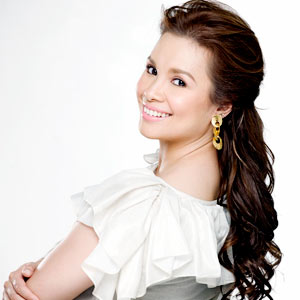 For her December 11 and 12 concert, Lea Salonga (in photo) will be joined by special guests Richard Poon, the award-winning dance group Philippine All Stars and Ai-Ai de las Alas.

Although international theater actress and singer Lea Salonga's forthcoming concert Lea Salonga...Your Songs is her only one in Manila in 2009, she intends to make it worth the wait by ensuring it will be the ultimate crowd pleaser.

Calling Your Songs the concert for the fans and by her fans, concert producer AmbientMedia and Lea are currently conducting an online poll via www.LEAyoursongs.com through which people could request for songs they want to hear from the renowned Filipina singer.

"We will choose songs that I don't usually sing in my concerts or those that are already on DVD or CD. If I have to learn an all-new repertoire, I'll do that just so my fans are happy," she said.

Not one to hold a generic type of concert, Lea always comes up with an interesting concept for every show she does. Some of the themes she has used in the past are Broadway, OPM and standards.

Your Songs, however, has got to be her most anticipated concert ever because she has had fans waiting for it longer than usual. Since the start of 2009, Lea has been busy holding shows abroad in such countries as the U.S., Singapore, Thailand and Canada.

Some of her fans even thought Lea might have already forgotten about them—until their idol proved that she was merely saving the best for last. Beyond singing the songs that they have always wanted hear from her, a lucky fan of Lea who had sent in a video request that makes the repertoire will get the chance to join Lea onstage at the concert.

"We've had the most eclectic requests—from Lady Gaga's 'Poker Face' to Michael Jackson songs. Some of the songs sent in have me thinking that my fans are geniuses in that they make me go, 'Wow! Why didn't I think of that before?'" revealed Lea.

Their website has been clogged with traffic since it was opened. Within the first week alone, at least 1,300 requests have been made for "Bayan Ko," which Lea sang during President Cory's Funeral Mass, topping the list.

"But that can still change. Anything can happen. Let's just say I won't be surprised even if I myself get surprised with the final set list," she said. According to the singer, going through the songs requested of her through the website gives her fresh insight on how her fans' musical taste has grown—or remained the same. "We still get requests for songs such as 'On My Own' from Les Miserables and 'Last Night Of The World' from Miss Saigon. Some things never change," she pointed out.

Lea Salonga...Your Songs will be held at the PICC Plenary Hall, Pasay City on December 11 and 12. Produced by AmbientMedia, a media and entertainment company whose aim is to bring the talents of both artists and entrepreneurs together in memorable shows, this concert will have crooner Richard Poon, the award-winning dance group Philippine All Stars and Concert Comedy Queen Ai-Ai de las Alas as special guests.

Lea Salonga...Your Songs will be under the musical direction of Gerard Salonga together with the 47-piece orchestra FILharmoniKA.