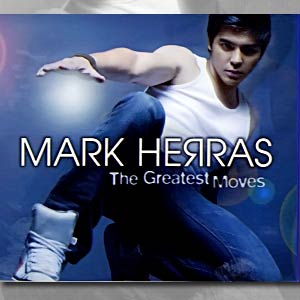 Mark Herras's third album, The Greatest Moves, boasts of tracks personally handpicked by the actor-performer himself. This 13-track album is now available courtesy of Universal Records.

StarStruck graduate Mark Herras would rather not compare himself to other artists who followed his lead in releasing dance albums one after the other.

While acknowledging that each has its own distinct traits to offer to the listening (or should we say, dancing) public, Mark is very much upfront in reminding a fact: "Ako po ang nauna."

Setting up a trend in the local music business, Mark has already achieved platinum status based on the sales of his past two albums, Dance Hits and Dance Party. With the release of his third dance disc titled, The Greatest Moves, Mark hopes to duplicate or even surpass the success of his previous efforts.

It was perhaps a tribute to Mark's bankability as a record artist that Universal Records listened to some of his suggestions on how he wanted the album to sound and appear to his fans. On top of Mark's request is for the record to reflect his newfound maturity as an individual.

Mark also chose the songs to be included in the record with the approval of the label and his handlers.

Mark, who discovered his love and talent for dancing while still in grade school, admitted that he himself was shocked with the positive feedback received by dance albums here in the country but has learned to understand and eventually appreciate the trend. It only shows, according to Mark, that there is a demand from the public much as there is a clamor to hear other music genres.

Mark Herras: The Greatest Moves is now available in all record bars courtesy of Universal Records.