Ne-yo: Live in Manila to be held this Saturday, January 9 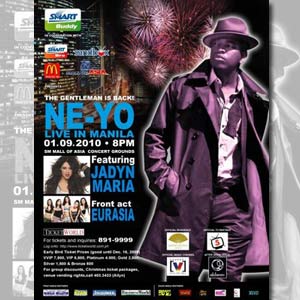 R&B singer Ne-Yo returns to the Philippines for his January 9 concert at the SM Mall of Asia concert grounds. CLICK HERE to buy show tickets.

2010 promises to start with a bang with the arrival of American pop and R&B/soul singer and songwriter, record producer and actor Ne-Yo. He is coming to the Philippines for the second time after his successful Because of You Asian Tour in 2008 at the Araneta Coliseum.

The upcoming event dubbed Ne-Yo: Live in Manila will take place this Saturday, January 9, 2010 (8 pm) at the SM Mall of Asia concert grounds.

MAKING A NAME. Ne-Yo emerged in the recording industry as a member of the now defunct Las Vegas-based quartet, Envy. After the group disbanded in 2000, he signed his first album under Columbia Records but was dropped from the label before releasing the album. But he first gained recognition as a songwriter when American singer Marques Houston recorded Ne-Yo's "That Girl," which was supposed to be the latter's first single on his unreleased album.

Though Ne-Yo wrote and contributed songs to some American singers such as Christina Milian, Mary J.Blige, Faith Evans and Musiq to name a few, it all failed on giving him attention from the mainstream music. Not until he wrote "Let Me Love You" for singer Mario that reached number 1 on the Billboard Hot 100 and stayed on the top spot for nine weeks. After the successful release, Ne-Yo signed at Def Jam under American hip-hop artist Jay-Z's mentorship.

Shaffer Chimere Smith in real life, the name "Ne-Yo" was coined by one of America's music producer, Deon Evans, known as Big D Evans. Neo is a fictional character in the hit sci-fi movie The Matrix. To differentiate it from the cahracter, he spelled it as "Ne-Yo" for commercial vibe until everybody was accustomed to it.

ALL THE WAY TO THE TOP. After six years in the music industry, Ne-Yo released his debut album, In My Own Words, which contained the U.S. No. 1 hit "So Sick" in early 2006. The album debuted at number one both on Billboard 100 and Billboard 200 Charts.


After a year, he released his sophomore album, Because of You, which contained the U.S. hit, "Because of You" in May 2007. In September 2008, Ne-Yo released his third album, Year of the Gentleman in Japan. It contained the top 10 hits "Closer," "Miss Independent" and "Mad." It was also cited by the Rolling Stone magazine as "a superb concept album" garnering nominations at the 2009 Grammy Awards as Best Contemporary Album and Album of the Year. Its single "Closer" vied for Best Male Pop Vocal Performance, and "Miss Independent" won for Best Male R&B Vocal Performance and Best R&B Song.

In September 2009, Ne-Yo released his greatest hits album called Ne-Yo: The Collection in Japan. It's a limited edition CD+DVD edition complete with the music videos of his monster-hits.

Since Ne-Yo's debut, he has had five top 10 songs on the billboard Hot 100 and two No. 1 albums on the Billboard 200. He has also written songs for other artists including Whitney Houston, Celine Dion, Ciara, Anastacia, Enrique Iglesias, Rihanna and Beyonce.

His latest single "I Never Knew I Needed" is the Original Soundtrack of the Walt Disney Pictures animated film The Princess and the Frog. He was also to work on what should have been Michael Jackson's latest album before the latter's untimely demise.

Ne-Yo is also set to star in, produce and write the soundtrack of the film Venice Beach, which tells the story of a couple's blossoming romance that is questioned by friends. This isn't the first time Ne-Yo has worked on the big screen. He appeared and contributed songs to the soundtracks of his past film appearances--Save the Last Dance 2 (2006) and Stomp the Yard (2007).

MANILA CONCERT WITH JADYN MARIA. With an entourage of more than 30 artists composed of band members, dancers, lighting designers and special effects personnel, Ne-Yo will perform together with Puerto Rican singer-songwriter Jadyn Maria.

Born Joy Lynn Strand, sexy and sassy Puerto Rican singer and songwriter Jadyn Mariam started in the music industry when she signed under Sparrow Records, EMI's Christian music subsidiary. She was discovered when she performed at a wedding at the age of 17. She also signed music contracts for Virgin Records and Zomba Label Group which both did not push through. But after signing a songwriting deal with Universal Music Publishing and meeting Ne-Yo's manager and then Ne-Yo himself, Jadyn Maria was convinced to sign, thus being the first artist, under Ne-Yo's Compound Entertainment label.

This 24-year-old Latina's debut album titled Man's World hit stores last year featuring songs written by herself, Ne-Yo and Katy Perry. Jadyn Maria is a friend of Katy Perry for more than six years. She appeared in Perry's music video for "Hot and Cold" as a bridesmaid in 2008. And collaborated with duo Stargate , D. Smith, B Major, Flo-Rida, Ashley Tisadle among others. Since her debut single, "Good Girls Like Bad Boys" released on June 2009 with Flo Rida, Jadyn Maria has been making waves in the music scene.

With half-European and half-Asian all-female group, Eurasia, Viva Records' newest artist, the one-and-a-half hour show will showcase some of Ne-Yo's popular hits such as Because of You, So Sick, Sexy Love, Hate That I Love You, Mad and other award-winning songs.


This concert is produced by Brown Cross Investments, Inc.