All hail the United Church of Edgar! 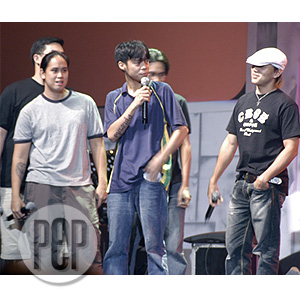 FROM MIKE VILLEGAS: They're irreverent, mentally suspect, and have been the musical mirror of the Filipino's sense of humor for over a decade now. They're the ever-popular Parokya Ni Edgar, and their disciples number in the millions (yet another demographic our religion-courting politicians might try wooing over)! I've been a fan for years, and I thought I'd share some great memories with you, o treasured PEP reader!

I recently got to hang out with the band a few weeks back, and it struck me how tight they were. Not just musically (where they've taken great strides, their grooves seemingly locked-in from years on the stage and in the studio), but also as friends—and I've been around too many manufactured groups to know the difference. They genuinely care about each other. Something as seemingly inconsequential as a quick voice over for one member can turn into a full blown laugh-in, as the entire band almost always shows up to support every other guy during recordings.

Speaking of genuine, I remember meeting vocalist Chito Miranda [frontman of the band Parokya Ni Edgar] for the first time about ten years ago at a recording studio in Makati, and being blown away by his penchant for comic relief. I was there producing Bayang Barrios's first album for Universal Records, and it was always a blast hanging out with the boys between takes. One evening they approached me to borrow one of my guitars, a nylon string acoustic, for one of their songs. (I never did find out which number immortalized that six-string!) I remember walking into their studio's control room a day later to ask how the session went, and hearing soft laughter coming from one corner of the otherwise empty room. Just one voice, snickering a joke and giggling away quietly, over and over. It was Chito—face down, on his feet, and rocking slightly to a rhythm—and laughing at his own verbal inventions.

It cemented certain things in my mind about this group—that they're not just easy antics and quick fart jokes; they're the real comic deal—and they were going to be huge.

Fast forward now to numerous platinum records and every Award you could think of—the Awit, the Rock, you name it—and Parokya Ni Edgar are still at the top of their game. I'd like to think this is so because they aren't a Comic Relief band (a term which they supposedly coined). They're a bunch of great songwriters who not only excel at comedy, but also compose some of the best—dare I say—serious songs out there. I say no one is more insightful than the comedians in our lives, and this band proves that adage. They have an edge in observing true human behavior (being their bread), and writing about it (their butter).

As guffaw-heavy as their humor is (I once had to emergency-park my car along EDSA for fear of crashing, as I had tears in my eyes from laughing at "The Yes Yes Show"), it's the slightly more sober songs like "Halaga" and the brilliant "Tsokolate" that I feel will cement their place among OPM's most revered company.

Singing about the similarities between our favorite confection and the other brown stuff is relatively easy; comparing chocolate's deformation to the trust irrevocably lost between two parties drifting apart is another thing entirely. And there lies the genius of Parokya Ni Edgar: They'd rather look like they're underachieving and then surprise us than make a big fuss and end up disappointing. That's smart, that's hard, and that is so genuinely Pinoy.

So here's a shout-out to the Irreverrends Chito, Vinci, Gab, DinDin, Buhawi and Darius: Thanks for helping us, your converted, hang on to our sanity for the last ten years! Mabuhay kayo!