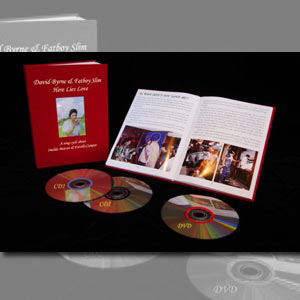 Here Lies Love documents the life of former First Lady Imelda Marcos set in music. The project is a collaboration of David Byrne and Fatboy Slim with artists like Tori Amos, Natalie Merchant, Steve Earleand Cyndi Lauper, among others, providing vocal to some of the tracks.

A concept album chronicling the life and times of former First Lady Imelda Marcos is set to be launched this month according to reports.

A deluxe edition of the project composed of CDs, DVD containing six music videos and a 100-page book will also be released separately.

The album's music represents the various stages in Imelda's storied life beginning from her poor upbringing to her ascend to power to the Marcoses hurried exodus from Malacanang in the middle of the historic EDSA People Power in 1986. Interestingly, the project likewise touches on Imelda's overlooked relationship with a loyal childhood servant named, Estrella Cumpas.

"The story I am interested in is about asking what drives a powerful person—what makes them tick? How do they make and remake themselves? I thought to myself, wouldn't it be great if—as this piece would be principally composed of clubby dance music—one could experience it in a club setting? Could one bring a story and a kind of theater to the disco? Was that possible? If so, wouldn't that be amazing?" Byrne wrote in the introduction.

SET FOR THEATER. Incorporating theater and disco to the music was based on the fact that Imelda was a staunch supporter of the stage during her long reign.

Byrne also took note of Imelda's notorious partying habits: "Some years ago I read that she loved going out to dance clubs and even had a mirror ball installed in her New York townhouse!"

The production of Here Lies Love started in mid-2000 with Byrne performing some of the tracks sporadically during live shows in 2006 and 2007.

"The Public Theater [in New York] is developing the theatrical version for a future production. But for now there is this version," continued Byrne, who is accepting pre-orders of the album through his official website www.DavidByrne.com.

It is unclear, though, if the project will find its way commercially here in the Philippines once released in the international market on February 23.

David Byrne is a Scottish born musician who gained fame as the principal songwriter of the American new wave band Talking Heads. Since the band's breakup in 1991, Byrne has pursued a solo career by releasing his own albums and venturing into various projects through diverse mediums.

1. Here Lies Love (vocals by Florence Welch)
2. Every Drop of Rain (vocals by Candie Payne & St. Vincent)
3. You'll Be Taken Care Of (vocals by Tori Amos)
4. The Rose of Tacloban (vocals by Martha Wainwright)
5. How Are You? (vocals by Nellie McKay)
6. A Perfect Hand (vocals by Steve Earle)
7. Eleven Days (vocals by Cyndi Lauper)
8. When She Passed By (vocals by Allison Moorer)
9. Walk Like A Woman (vocals by Charmaine Clamor)
10. Don't You Agree? (vocals by Roisin Murphy)
11. Pretty Face (vocals by Camille)
12. Ladies in Blue (vocals by Theresa Andersson)