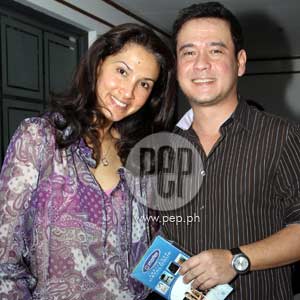 Sibling Revelry, a dinner-concert to be held at the Rockwell Tent on February 14, brings together two of the country's most talented musical siblings in a rare evening filled with big band standards, soulful ballads, and the most romantic songs from Broadway and the West End.

"It's going to be a fun, musical evening performing with my sister," says Raymond. "It's not often that we get to share the stage...and to think she was my first-ever singing partner!"

Menchu continues, "Growing up, we spent a lot of time singing together, in front of family and friends...it's been a while since we've been able to do that. It's always been fun to do that. I think the last time we shared a stage before a concert audience was in the '80s, when we were both New Generation artists."

Suffice it to say that the siblings have indeed come a long way. Since appearing as Louis when he was twelve years old in the Repertory Philippines' staging of The King and I, Raymond pursued a singing career, recording a total of eight albums (the latest of which is Full Circle, his big band album) and performing in concerts around the country and the world.


Meanwhile, Menchu proceeded to conquer the stage with one memorable performance after another in dozens of musicals, including the role of Ellen, the wife of American soldier Chris, in the Manila staging of Miss Saigon. Her recent portrayal of Mrs. Lovett in Sweeney Todd is considered among her finest performances.

Raymond and Menchu will be accompanied by an eight-piece band comprising of two keyboardists, one bassist, one drummer, two trumpeteers, one trombonist, and one saxophonist under the musical direction of Jun Austria.

Prior to the concert, a four-course, sit-down dinner with a menu designed and prepared by Le Cordon Bleu-trained chef Him Uy de Baron of Chef Cuisine will be served to guests.

"To be able to sing the songs that we love, the songs we grew up with, is a real treat for us," Raymond says.

Adds Menchu, "And we hope that when we do sing those songs, the audience will see why we fell in love with them, making the concert a treat for them as well."

With music from Sinatra to Streisand, from the Carpenters to the Osmonds, from Broadway to the West End, the Lauchengcos plan to make February 14 a night to remember.