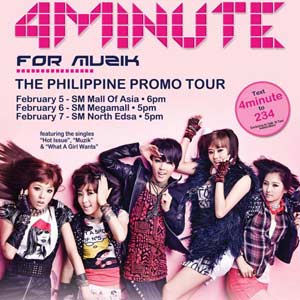 The members of 4Minute, composed of Ji Hyun, Ga Yoon, Ji Yoon, Hyun A, and So Hyun, will perform on February 5 at SM Mall of Asia, February 6 at SM Megamall and February 7 at SM North Edsa.

The Korean Pop craze, popularly known as "K-Pop" has long been part of Filipino culture. With a community of more than 5,000 members and growing, a trend has indeed become a standard lifestyle wherein Filipinos express their passion for all things Korean in various ways. Some are fond of Cosplay (costume playing), some can't get enough of Korean dance choreography, and most, if not all, just love the music behind these chinky-eyed wonders.

One can't help but wonder what caused this phenomenon to happen. It might be because of the influx of several Korean nationals who paved their way to local shores to learn English. Perhaps cable music channels also contributed to its tipping point. Yet, no matter what the reason is, K-Pop is here to stay, and fortunately, news of this has reached the hottest Korean groups, including the charming, irresistibly infectious quintet from South Korea named 4Minute.

Ji Hyun Nam, 19, is the group leader. She is currently taking ballet lessons at Sangmyung University's Dance program but took a leave to concentrate on her musical career.

Ga Yoon Heo, 19, has been preparing for her debut upon graduating from a girls' high school. She is also the group's lyricist.

Ji Yoon Jeon, 19, graduated from high school and has also been preparing for the debut of 4Minute. She is also fond of writing songs and cooking.

Hyun A Kim, 17, was formerly a member of Wonder Girls, before quitting in July 2007 due to health reasons. (She was replaced by Yubin.) After recovering her health, Hyun A switched over from JYP to Cube Entertainment to fulfill her dreams of becoming a singer. She is also the resident rapper of the group.

SoHyun Kwon, 14 going on 15, is the youngest of the group. She has received vocal training since childhood; even debuting in a young girls' group called Orange at the age of 11. Despite her early debut, she is very smart and is able to maintain top grades in school, ranking first or second in her classes. Many have also compared her to Sandara Park due to their undeniable physical resemblance.

The members of 4minute have been getting singing lessons for almost three years. They also make it a point to have accompanying dance choreography for their chosen singles and songs for their shows—proves that their performances require a lot of creativity and preparation. Here in the Philippines, they just recently released their first hit song "Hot Issue" which has received positive feedback and support from fans, radio stations and music channels.

The group is also set to release two of their other songs, "Muzik," a dance craze that gives a laid back, hip-hop feel that features the rapping prowess of Hyun A and Ga Yoon. Their third single "What a Girl Wants," on the other handveers away from the typical fast-paced beats of the K-Pop genre. It is an infectious and adorable power pop track that features the girl's vocals and creative choreography with their teeny-bopping moves.

The group describes their music as "Candy Funky,"which in detail, means Candy (colorful and sweet) plus Funky (defiant, retro and free). With their looks, talent, and adorable overall Korean image, it is no doubt that 4Minute is bound to be one of the biggest names in the industry today, a spark among a blanket of Korean pop stars that never fail to make the Filipino K-Pop community bigger and more known to the masses.

Watch as 4Minute visits the Philippines this February for a series of mall shows around Metro Manila. They will also release their album in CD + DVD format in time for their scheduled promo tour.

Watch them on February 5 at the SM Mall of Asia, February 6 at SM Megamall and February 7 at SM North Edsa.

4Minute's new album and promotional tour is exclusively brought to you by MCA Music Inc.