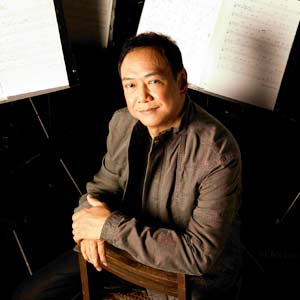 For his upcoming show titled Ballet and Ballads, Basil Valdez will serenade viewers as ballet dancers interpret his signature hits.

In what promises to be one of the most romantic post-Valentine treats, premier balladeer Basil Valdez takes centerstage as guest performer in the latest edition of Ballet Manila's Ballet & Ballads. The series of shows will be seen on: February 19, 7:30 p.m., February 20, 1 and 5 p.m., and February 21, 1 p.m., at the Aliw Theater, Star City, CCP Complex, Roxas Boulevard, Pasay City.

"It will definitely be a show to swoon to," gushes Lisa Macuja-Elizalde, Ballet Manila artistic director and principal ballerina and an admitted Basil Valdez fan, who is set to interpret signature Basil hits such as "Kastilyong Buhangin" (partnered by Nazer Salgado), "Ngayon at Kailanman" and "Corner of the Sky" (the latter two with the BM ensemble).

Valdez himself was so excited about doing this series that he suggested "Salamin ng Buhay" to be included in the repertoire. Aside from being a personal favorite of his that reflects his life's journey, Basil notes, "It's a perfect song to dance to."

The balladeer will also have solo numbers of his popular tunes "Mahiwaga" and "You."

Ballet & Ballads also features: Dancing to Czerny, a BM staple also choreographed by the late Tony Fabella; Dulce, which is described as "ballroom dancing Ballet Manila style"; Reconfigured, the five-minute piece which won first prize in the first Neo-Classical Ballet Choreography competition of the National Commission for Culture and the Arts last December; and Rebel, the first ballet of Augustus Damian III to be specifically choreographed for Macuja-Elizalde and junior principal dancer Rudy De Dios.

Macuja-Elizalde says Ballet & Ballads is a must-watch because its format allows a unique presentation that combines a full-fledged ballet in the classical, neo-classical and contemporary styles and a singer performing either solo or with the ballet dancers performing to live singing onstage together.

Ballet & Ballads is a pet project of Manila Broadcasting Company chairman Fred J. Elizalde, Macuja-Elizalde's husband. Combining the resources of MBC and Ballet Manila, it is aimed at popularizing ballet all over the country. Launched in 1998, the series has been presented in major venues in Metro Manila and has been taken on tour to key areas in the provinces such as Cebu, Bacolod, Iloilo, Dagupan, Baguio, Davao, General Santos, Naga, Legazpi City, La Union and Cagayan De Oro.

Macuja-Elizalde points out that this upcoming Ballet & Ballads presentation is very special. "It's the first time we are performing with Basil Valdez, the ultimate ballad icon, and we will be dancing to his hit songs! It is so exciting because it's not just a ballet gala, and not just a concert-it's both!"

Roxanne Lapus directs the show. Ballet & Ballads is presented by the Manila Broadcasting Company. For ticket inquiries, please call Ballet Manila at 400-0292 or 525-5967 or e-mail info@balletmanila.ph