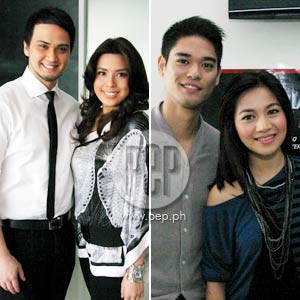 Groovin' Love will see Billy Crawford and Nikki, and Jay-R and Kyla doing a different kind of Valentine's Day show on February 14, Sunday at the SMX Convention Center, Pasay City.

Jay-R, the country's R&B prince and Billy Crawford, the international R&B sensation will be combining their acts together for Groovin' Love, dance concert on Valentine's Day to be held at the SMX Convention Center.

Jay-R and Billy want to share the message of love and reconciliation. They are setting aside the "network war" because they believe that they can put up a very distinctive concert-party. They will be joined by Kyla, the country's R&B princess and R&B femme fetale Nikki Gil.

PEP (Philippine Entertainment Portal) interviewed both artists separately at the presscon for the concert held last week at The Lounge on Tomas Morato, Quezon City.

Billy shares that it was both their ideas to team up for the upcoming show.

"Lahat kami magkaibigan na. We love performing together. It was a no-brainer. Let's go and do it then," Jay-R added.

Billy said, "And then we came up, why don't you try to get Kyla and I'll try to get Nikki. At least we're gonna be concentrating on one show. Let's just have them. We're gonna have a party. A big ass party."

The concept of a concert-party is unique especially since it would be happen on Valentine's Day.

Billy begs to differentiate it, "Any other day was taken by someone else. For me, I was also thinking what I wanted to do for Valentine's Day with Nikki. And actually, the opportunity to work with someone who I care for and love during Valentine's Day, why not? It's not all about work but more of love and fun."

"It's gonna be extraordinary. It's not your typical Valentine's show. Other shows are all about love songs. This is a big party. That's what we're trying to give to singles, couples, married people, divorced, whatever it is. Everyone involved."

Jay-R added, "We want everyone dancing in this concert. We want the crowd to be dancing with us at the end of the night."

R&B BROTHERHOOD. Jay-R said that it's been nice working with Billy.

"We've really been good friends since we worked at SOP. He's easy to go along with. It's a great experience to be working with friends," the R&B prince said.

But Jay-R concedes that if they were to face each other in a dance showdown, he'd give it to Billy already.

"I can't dance like Billy. I wouldn't want to attempt to sing his songs. Ang laki ng pressure nun. If I start singing 'Bright Lights', everyone is gonna expect me to do the 'Bright Lights' dance, di ba? I better not compete in that area with Billy because he's the master in dancing," Jay-R said.

Billy also concedes that he can't sing the songs of Jay-R.

"Jay-R is a dope singer. For me, he is one of the most intimidating artist out here. He's just a good friend of mine. It's difficult to sing his songs and he can't sing my songs either. We just want to have fun, that's all there is," Billy said.

"Me, Jay-R and Kris Lawrence are just like one big family. We play basketball together. We hang out from time to time. Every time he has this new song, 'Yo, check this out.' It's vice-versa. So, me and Jay-R are just one big family."