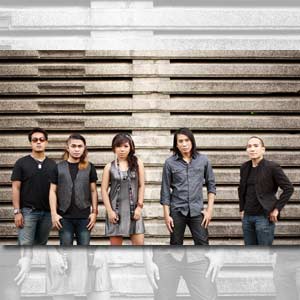 The new MYMP bannered by new vocalist Juliet Bahala will perform on February 12 at the Music Museum in the pre-Valentine concert MYMP Now: Prouder Than Ever .

MYMP founder and guitarist Chin Alcantara had no clue back in 2008 that the single, "Now," would turn out relevant in defining the band's future.

The song written by Cattski Espina and arranged by Chin touches on hope and love amidst life's uncertainties. It teaches one to seize the present and not worry about the future.

There's a reason / why we love each other now / And we don't know if this is forever... goes the song's refrain as sung by then vocalist Juris Fernandez.

Two years after the single's release and with Juris gone from the hit-making act, Chin continues the group's legacy while making changes to overhaul MYMP's image.

PROUDER THAN EVER. Taking Juris's place is new vocalist Juliet Bahala, who assumed the vacated spot through an audition called by Chin. Juliet's demo would eventually serve as the yardstick when other applicants were considered.

Eighteen-year-old Juliet was a former Grand Champion of the NCCC Star of Davao in 2007 and 2005 National Music Competition for Young Artists Grand Prize Winner.

Juliet was first introduced to the public last January 24 at ASAP XV and to the members of the entertainment press on February 3. She will have her baptism of fire on February 12 in the pre-Valentine concert MYMP Now: Prouder Than Ever at the Music Museum in San Juan.

The special concert, according to Chin Alcantara, will formally seal Juliet's place as the band's new face and showcase her vocal flexibility in numbers previously left out by the group to accommodate their former singer's range.

Chin hopes to jumpstart the new MYMP through the pre-Valentine concert before taking Juliet to shows and tours around the country and abroad. The band also hopes to make a new album.